"Gangs Will Go After Him": El Salvador Bishop Urges US To Not Deport Son

Bishop David Alvarado said his son fled gangs in El Salvador that had forced him to distribute weapons and drugs. 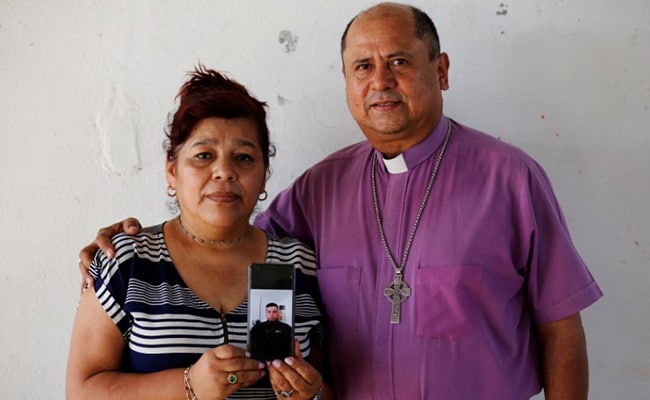 Bishop David Alvarado with his wife who holds a photo of their son.

The top Anglican bishop of El Salvador has urged the United States not to deport his son back to the troubled Central American nation, fearing brutal gangs who have threatened to murder the 34-year-old for refusing to work for them.

Bishop David Alvarado said his son, Josue Alvarado, hopes to be granted asylum in the United States or Canada.

The younger Alvarado is in custody in Ohio. He went to the United States to work in construction in October 2016 to flee gangs in El Salvador that had forced him to distribute weapons and drugs as a taxi driver, his father, 57, told Reuters.

After refusing to continue, he received death threats before filing a complaint with prosecutors, the bishop added.

"If he returns, the gangs will go after him again," Bishop Alvarado said. "He fled because of the threats."

His son's U.S. asylum request was denied last month for lack of reasonable fear, according to a U.S. Department of Homeland Security notification seen by Reuters.

Josue Alvarado was arrested while waiting for highway assistance after suffering a flat tyre. Police turned him over to Immigration and Customs Enforcement because he could not present documents showing he was in the country legally.

"We live here under a structure of violence going back many years because of the gangs," the bishop added.

Gangs have a strong grip on the region, and have been one of the factors pushing Salvadorans north, despite tougher measures from the United States and Mexico to crack down on migration.

The number of Salvadorans deported from the United States and Mexico increased 40% last year compared with 2018.