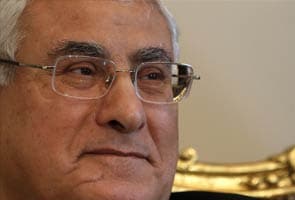 Brotherhood supporters will take to the streets on Friday in their campaign to reverse the military overthrow of Egypt's first freely-elected president, but the movement also gave a first sign of willingness to negotiate with its opponents.

Mansour pledged in his first public address since he was sworn in on July 4 to restore stability and security.

"We are going through a critical stage and some want us to move towards chaos and we want to move towards stability. Some want a bloody path," he said in a televised address. "We will fight a battle for security until the end."

The rallies aim to show that Morsi's supporters are not ready to accept the new military-backed government. However, a Brotherhood official also told Reuters on Thursday that the movement had proposed a framework for talks mediated by the EU.

Sworn into office on Tuesday, the cabinet of interim premier Hazem el-Beblawy busied itself with tackling Egypt's many crises, buying foreign wheat to replenish stocks and banking $3 billion in badly needed aid from the United Arab Emirates.

Still stunned by the July 3 toppling of Morsi, his Muslim Brotherhood, and allies grouped in what it calls the National Alliance for Legitimacy, urged the nationwide rallies on Friday, predicting millions would take to the streets.

"To every free Egyptian man and woman: Come out against the bloody military coup," the alliance said in a statement.

Brotherhood official Gehad el-Haddad, who represented the movement in previous EU-facilitated talks with other political groups, told Reuters that the organisation would not retreat from its demand for the reinstatement of Morsi.

However, signalling for the first time a formal readiness for negotiations, he said the Brotherhood had proposed through an EU envoy a framework for talks to resolve Egypt's crisis. "We never close the door to dialogue," Haddad said.

Egypt, the most populous nation in the Arab world, is a strategic hinge between the Middle East and North Africa and has long been a vital U.S. ally in the region.

The African Union warned on Thursday that Egypt risked being engulfed by civil war unless its government embraced Islamists, none of whom were included in the 33-strong cabinet.

Egypt's Nour Party, the country's second-biggest Islamist group which had initially backed a military-led roadmap to guide the country to new elections, said on Thursday the government would have to seek a way forward with the Brotherhood.

"I believe that those in power need to realise that increasing pressure on the Muslim Brotherhood and playing down the emotions of their supporters will lead to extremely bad results," Nour party spokesman Nader Bakkar told Reuters TV.

At least 99 people have died in violence since Morsi's downfall, more than half of them when troops fired on Islamist protesters outside a Cairo barracks on July 8.

A security source told the official Middle East News Agency that policing would be intensified at "all important and vital facilities" on Friday.

Tamarud, the movement which organised the massive anti-Morsi protests, has also called for rallies on Friday, including one close to a Cairo intersection where thousands of Brotherhood supporters have been holding a vigil for weeks.

It called the rallies "the people against terrorism", blaming Morsi followers for recent violence.

Three members of the security forces died overnight in attacks blamed on Islamist militants in the Sinai peninsula, which borders Israel and the Gaza Strip. The militants have pledged to continue the fight until the return of Morsi, who has been held in an undisclosed location since his downfall.

Among the many accusations levelled against Morsi was mismanagement of the economy. The budget deficit has soared to about $3.2 billion a month, foreign reserves are more than 50 percent below their December 2010 levels and unemployment is more than 13 percent.

Bread has traditionally been one of Egypt's most explosive issues and an ex-minister from Morsi's government said last week that the country had less than two months' supply of imported wheat in its stocks, well below its preferred six-month supply.

Looking to narrow the shortfall, Egypt's main wheat-buying agency, the General Authority for Supply Commodities (GASC), bought 300,000 tonnes of wheat from global suppliers - only the second such purchase since February.

Promoted
Listen to the latest songs, only on JioSaavn.com
The cash-strapped government got a fillip with the arrival of the UAE aid, part of $12 billion that Gulf Arab states pledged after Morsi's removal. Saudi Arabia is due to transfer $2 billion in the coming days, Egypt's central bank said.

The funds should buy the cabinet time to try and fix Egypt's numerous problems, although analysts have warned it might also persuade officials to delay difficult decisions needed to right the listing economy.
© Thomson Reuters 2013