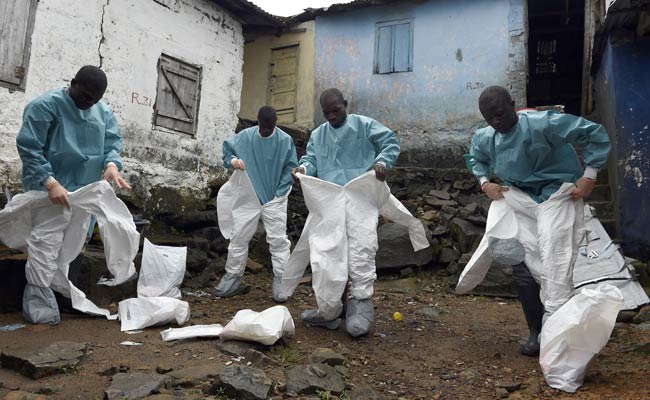 Conakry: The only possible place to encounter Ebola in Conakry is the main treatment unit, yet elsewhere in Guinea the virus is thriving in a febrile atmosphere of deep mistrust and swirling conspiracy theory.

The impoverished west African nation and its neighbours Sierra Leone and Liberia have registered more than 11,000 deaths since the epidemic flared up in December 2013.

It is in Guinea, the original epicentre but least-affected country, where the reaction to the fight against Ebola has been the most suspicious, however, manifesting itself in sporadic bloodshed.

Eight members of an outreach team in the southeastern town of Womey were killed by protesters who denied the existence of Ebola and denounced a "white conspiracy" in September last year.

Violence erupted last week in the country's western provinces, where there are around 20 confirmed cases, with attacks targeting public institutions, ambulances and even health workers.

These examples of the "reluctance" of locals, to employ the official parlance, are igniting new transmission chains and so hampering efforts to stamp out the virus, say the authorities.

"When you encounter this reluctance, it is not always easy to follow people who are hiding or trying to escape monitoring and investigations," said Sara Christiaensen, a health promoter at Donka Hospital in Conakry for Doctors Without Borders, which is known by its French initials MSF.

Among the many reasons, she says, is the fear that people will die in Ebola treatment units (ETUs) and then "we burn the bodies and sell the blood and body parts".

"Rumours remain a big challenge," she told AFP, adding that MSF systematically lists the false stories it encounters, in a coordinated bid to counter misinformation.

In a paper reporting the concerns of locals in 26 villages in southern Guinea in the summer of 2014, socio-anthropologist Julienne Anoko, a consultant for the World Health Organization (WHO), classified all of the rumours which are found, in some form or another, in Guinea and its neighbours.

In addition to organ and corpse trafficking, theories abound about white Westerners using Ebola scare stories to exploit local resources, and about African leaders making up the epidemic to get aid from these same white people.

Elsewhere people believe the virus or its response is all about eliminating sections of the population deemed hostile to the government.

Frederic Le Marcis, a social anthropology professor at the Ecole Normale Superieure de Lyon, sees this "reluctance" as a natural reaction to "an intervention of the state and more generally the elites who were perceived as corrupt and violent themselves".

This suspicion, he says, has been compounded by mistakes made in the initial emergency operation to curb Ebola.

A UN-sponsored report in May criticised the WHO's slow response, denouncing "serious gaps in the early months of the outbreak in terms of engaging with the local communities".

"These (locals) are not morons who have no knowledge and refuse the biomedical discourse that comes to save them, but people reacting to an experience that does not begin with Ebola," said Le Marcis, who has made several field trips to Guinea.

"Forest Guinea was a massive source for slaves going to all empires, that has always been on the margins and exploited," he told AFP.

The Ebola crisis, he said, had reminded the people in the southern region that they were dismissed as "savages against which you must struggle" during the regime of Sekou Toure, the first president who served from 1958 to his death in 1984.

"These were areas that were subjected to state violence in whatever form, with an approach of continuous exploitation, and that's true for the whole of Guinea," the researcher added.

MSF's Sara Christiaensen has noticed a fascination with the Cold War in Guinea, which she says has spawned a recurring rumour that Ebola was "created as a weapon" during this period.

Nevertheless, she says, awareness of ETUs and Ebola has increased.

"When we want to recruit, we now get a tonne of CVs whereas a few months ago we had difficulty finding people," she tells AFP.

But nothing can be taken for granted when it comes to raising awareness, a lesson confirmed by the bitter experience of the International Federation of Red Cross and Red Crescent Societies in last week's violence.

The attacks came less than two months after it announced it had managed to "significantly reduce resistance and animosity towards its volunteers" in Guinea.

"Security incidents, ranging from verbal abuse to physical violence, fell from 10 a month in early 2015, to eight in February, five in March and one in April to date," it said in a statement released in April.

"We know it's a cycle," said Facely Diawara, Ebola coordinator for the Red Cross and Red Crescent in Guinea.

"When there are new outbreak zones, we are usually exposed to two things.

"The first is fear that causes misinformation. And so that creates an uncomfortable situation and most of the time this manifests itself in actions of violence and of reluctance."

But he remains circumspect, predicting that the situation will change.

"It has been 15 months," he said. "They bang their fists against us, we wait, we talk, and afterwards they applaud us."