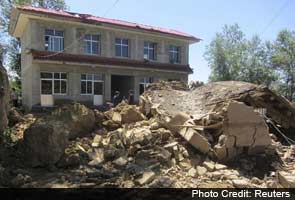 The government of Dingxi city in Gansu province, which was hit by quakes with magnitudes of 5.9 and 5.6, gave the figures on a verified social media account.

"More than 21,000 buildings were severely damaged and more than 1,200 have collapsed," an official at the provincial earthquake bureau told AFP, adding that 371 aftershocks had been recorded.

Pictures from the scene showed simple buildings reduced to rubble, with the pieces of corrugated metal scattered over the wreckage.

In one location 12 people were buried, the broadcaster quoted a witness as saying. "The rescue work is tough, because the house has been completely buried," the man said.

More than 2,000 soldiers, 300 police, 50 medical staff and two helicopters had been sent to the area, the official Xinhua news agency said.

"We are rushing to the scene," Dingxi's vice-mayor told CCTV, which showed an orange-suited rescue worker riding on a tractor.

"The damage to houses made from earth bricks has been severe and many are now unusable," the official said, adding that the number of people buried by the quake was still being estimated.

More than 700 rescue workers had arrived at the scene, CCTV said.

A resident of Min county told AFP he was at work at a medicine production plant when the tremor struck and he saw tower blocks shake "ferociously".

"I was in the workshop. I felt violent shaking and so I ran to the yard of the plant immediately," said the man, surnamed Ma.

"Our factory is only one floor. When I came to the yard, I saw an 18 storey building, the tallest in our county, shaking ferociously, especially the 18th floor."

While Gansu is one of China's more sparsely populated provinces, Dingxi city, which includes the worst-hit counties, has a population of about 2.7 million.

A total of 380 buildings collapsed and thousands were damaged in Zhang county, according to an online post by the Dingxi local government. Communications were cut off in 13 towns in the county, the official Xinhua news agency said, and power was off in some areas.

The quake was felt in the provincial capital Lanzhou and as far away as Xian, the capital of the neighbouring province of Shaanxi, Xinhua reported.

People posting on China's hugely popular microblogs expressed sympathy for the victims. "I hope the dead will rest in peace," read one typical remark.

Beijing's own China Earthquake Networks Centre put the magnitude of the larger quake at 6.6, Xinhua added.

The China Earthquake Administration said the same fault zone was linked to a magnitude 8.0 quake on July 21, 1654, it reported.

The USGS rated Monday's main tremor at seven on its "shakemap", with shaking perceived to be "very strong" and the potential to cause "moderate" damage.

Weather reports also said rain was expected in the area, which could hamper rescue efforts in the mountainous region.

Much of western China is prone to earthquakes.

A magnitude 6.6 earthquake in neighbouring Sichuan province killed about 200 people earlier this year, five years after almost 90,000 people were killed in a huge tremor in the same province.
Comments
China earthquake