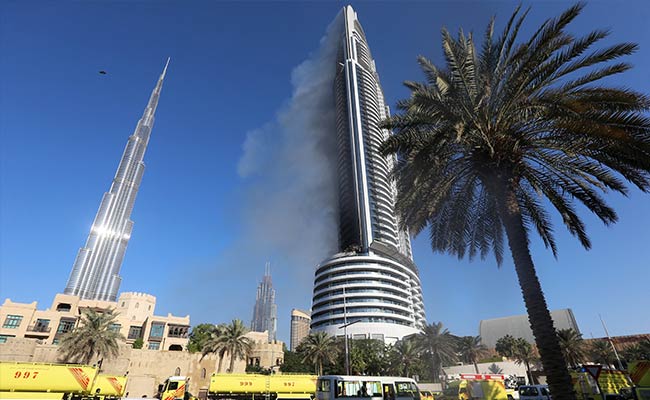 Plumes of smoke rise from the 63-storey Address Downtown Dubai hotel and residential block near the Burj Khalifa, the tallest building in the world, a day after the hotel caught fire on New Year's Eve, in Dubai. (Reuters Photo)

Dubai: Dubai's Emaar Properties has hired a local contractor to restore a fire-damaged hotel, stating today the New Year blaze would have "no material impact" on the company because the building and risk of fire are covered by its insurance.

Fire engulfed Emaar's 63-storey Address Downtown luxury hotel and residential tower on New Year's Eve. The fire has been contained and the company and authorities are investigating its cause, Emaar added in a morning statement to Dubai's bourse.

Experts are asking if cladding layers fixed to the outside of buildings for decoration, insulation or protection may in some cases make them more vulnerable to fire.

In a further emailed statement, Emaar said it had hired Dubai-based DUTCO Group as contractor to clear and restore the hotel. DUTCO representatives are already on-site and working "round-the-clock", the statement said. "As soon as clearing and assessment work is completed, construction will commence as per a tightly scheduled calendar," Emaar said.

"The details of the work including the timelines and plans will be revealed in due course." Emaar's hospitality division accounted for 12 percent of the firm's revenue in the nine months to September 30, 2015, its financial statements show.

The Address Downtown's nine-month room revenue was 87.6 million dirhams ($23.85 million), or 18 percent of the hospitality unit's total room revenue of 490 million dirhams. Emaar's shares ended 1.6 percent lower, having fallen as much as 4.4 percent in early trade.