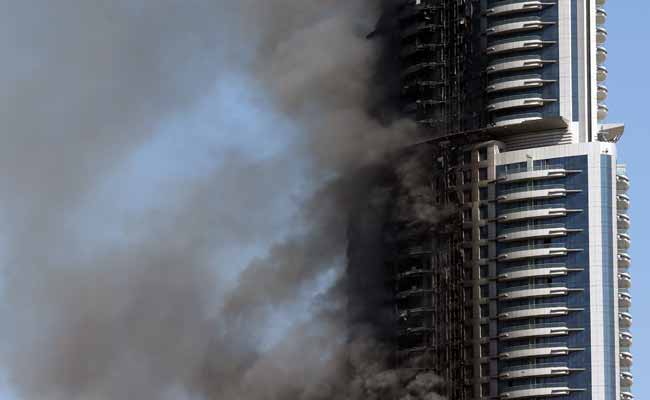 Dubai: Smoke was still rising from a 63-storey luxury hotel in Dubai today as authorities worked to determine the cause of a spectacular fire that engulfed the building on New Year's Eve.

The huge blaze at The Address Downtown hotel erupted around 9:30 pm (1730 GMT) on Thursday, sparking panic but no reports of serious injuries.

Authorities went ahead with a dazzling fireworks display at the nearby Burj Khalifa -- the world's tallest skyscraper -- despite the inferno, the latest in a series of fires in recent years to hit the buildings that make up Dubai's futuristic cityscape.

Officials have said the fire erupted from the outside of the building on its 20th floor but the exact cause was not yet known.

A top Dubai security official, General Dahi Khalfan, posted a picture on Twitter of a fire beneath a ledge of the building, saying the start of the blaze had been captured by a police criminal investigation photographer.

"This is where the search begins," Khalfan wrote of the picture, which appeared to show a lower portion of the building.

Witnesses described scenes of panic after the fire spread, with residents screaming and some fainting as they rushed to evacuate the building.

At least 14 people were slightly injured, one was moderately injured and one person suffered a heart attack during the evacuation, the government said.

Firefighters spent the night trying to extinguish the blaze.

Heavy black smoke still billowed from several floors of the hotel early on Friday, an AFP photographer said, as firefighters continued to douse the building with water hoses.

Roads leading directly to the hotel were closed but otherwise Dubai city centre appeared normal, with passers-by stopping to take pictures of the building with their mobile phones.

The hashtag #NeedanAddress trended on Twitter overnight as Dubai residents offered to open their homes to evacuated hotel guests.

"We have sofas, sleeping bags and an endless supply of love. Plus Nutella. #needanaddress #mydubai You're not alone. You're home," resident Faizan Jamal Tweeted.

Many on Twitter praised the response of fire and emergency services, pointing to the fact that there were no major injuries, though some questioned whether New Year's festivities should have gone ahead.

"Bizarre response of authorities in Dubai. Surely fireworks could have waited till tomorrow?" Sumbal Naqi wrote.

The Dubai government said evacuated guests were being offered alternative accommodation and provided a telephone number to call for assistance.

It published several videos on its Twitter feed of fireworks erupting around the iconic Burj Khalifa and said the New Year's celebration was a testimony to Dubai's "steadfast commitment to its major projects and initiatives".

A newspaper photographer who was on a 48th floor to take pictures of the fireworks when the fire erupted told AFP he had spent a harrowing 30 minutes standing on a ledge outside the building, only metres from the raging blaze.

The photographer, who asked not to be named, said he was trapped on a balcony by fire and smoke.

Unable to escape and afraid he would die of suffocation, he rolled out some 30 metres (100 feet) of heavy-duty cable from a nearby machine used by workers to clean the tower's windows, attached it to his belt and stepped off the balcony onto a narrow ledge.

"One hour, then that's it, I'm dead," he thought as he stood on the ledge. He was eventually saved by rescue workers after calling and texting colleagues asking for help.

The Address Downtown hotel, opened in May 2008 and owned by Dubai property giant Emaar's hospitality group, is the 18th tallest building in the city and the 93rd highest in the world.

A growing tourist destination, Dubai has become famed in recent years for its distinctive skyline and ambitious building projects, but has suffered from a number of spectacular fires.

In November, a massive blaze engulfed three residential blocs in central Dubai and led to services on a metro line being suspended, although no one was hurt.

In February, a huge fire gutted one of the emirate's tallest buildings, destroying luxury flats in the Torch tower and triggering an evacuation of nearby blocs in the Dubai Marina neighbourhood.

In 2012, a massive blaze gutted the 34-storey Tamweel Tower in the nearby Jumeirah Lake Towers district. It was later revealed to have been caused by a cigarette butt thrown into a bin.