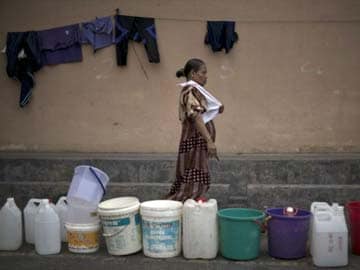 A resident walks past water containers as she waits for water distribution in Balakong, outside Kuala Lumpur on February 20, 2014.

Kuala Lumpur: Authorities began rationing water to thousands of households in Malaysia's most populous state on Tuesday, as a dry spell depletes reservoirs across a country normally known for its steady tropical downpours.

Much of Malaysia has for a month been under bone-dry conditions and high temperatures that have left some reservoirs at "critical" levels, sparked an increase in brushfires and led to protests in at least one hard-hit community near the capital Kuala Lumpur.

Malaysia does tend to experience dry weather early in the year, but this one is unusually long.

The lack of significant rainfall has caused increasing alarm, particularly in the state of Selangor, which surrounds Kuala Lumpur, and adjacent areas, as meteorologists have warned the dry spell could last another month.

Selangor is Malaysia's most populous state and its economic and industrial hub.

Water rationing in the state will affect an estimated 45,000 households, a state government spokeswoman said, adding Selangor was reducing the flow to four water treatment plants "until the weather improves".

"The reduction of water will start today," she told AFP. "What we need now is the rain."

Authorities have said planes are on standby to conduct cloud-seeding, but the spokeswoman said the effort has been hampered by inadequate cloud formation.

Residents in the Selangor town of Balakong have complained for weeks about taps running dry and last week about 200 residents staged a protest calling on authorities to provide water, according to reports.

The state of Negeri Sembilan, adjacent to Selangor, last week declared a water crisis, mobilising to supply treated water to thousands of households.

The hot spell has also contributed to more cases of dengue fever as it speeds up the life cycle of the aedes mosquito that carries the virus and enhances replication of the pathogen, experts say.

Promoted
Listen to the latest songs, only on JioSaavn.com
Deaths from the flu-like illness have risen to 25 this year, compared with just eight in the same period last year, according to the latest Health Ministry figures.

The number of cases has also quadrupled to some 14,000 so far this year. The World Health Organisation calls dengue one of the fastest-growing viral threats globally, especially in the tropics.