The US will impose 25 percent duties on targeted Chinese products to compensate for the harm caused to the American economy from China's policies, according to a fact sheet released by USTR. 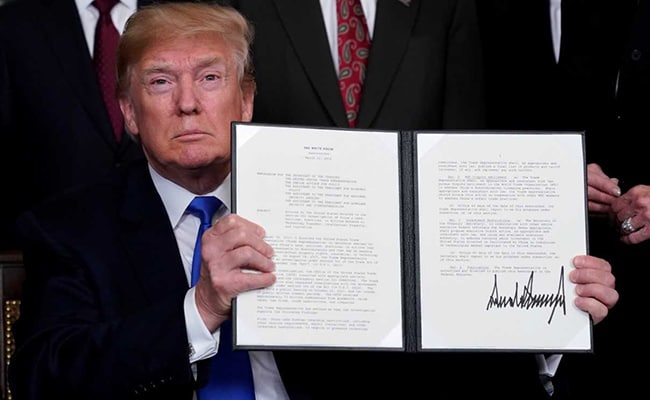 As he signed the tariffs order, Donald Trump told reporters, "This is the first of many." (Reuters)

The president instructed U.S. Trade Representative Robert Lighthizer to levy tariffs on at least $50 billion in Chinese imports. Trump signed an executive memo issuing the instructions on Thursday at the White House. Within 15 days, USTR will come up with a proposed list of products that will face higher tariffs.

The prospect of a trade war sent markets plummeting, with the Dow Jones Industrial Average down 724 points, almost 3 percent, its biggest drop in six weeks. Shares in Boeing dropped more than 5 percent.

The US will impose 25 percent duties on targeted Chinese products to compensate for the harm caused to the American economy from China's policies, according to a fact sheet released by USTR. The proposed product list will include items in aerospace, information and communication technology and machinery. USTR will announce the proposed list in the next "several days," according to the fact sheet.

"This has been long in the making," Trump said, adding that the tariffs could affect as much as $60 billion in goods. "We have a tremendous intellectual property theft situation going on" with China affecting hundreds of billions of dollars in trade each year, he said.

As he signed the tariffs order, Trump told reporters, "This is the first of many."

The move prompted a sharp rebuke from China.

"We don't want a trade war but we are not afraid of it," said China's ambassador to the U.S., Cui Tiankai. "If somebody tries to impose a trade war on us, we will certainly fight back and retaliate. If people want to play tough, we will play tough with them and see who will last longer."

Policymakers worldwide are warning of a brewing trade war that could undermine the broadest global recovery in years. Meanwhile, business groups representing companies ranging from Walmart to Amazon.com are warning U.S. tariffs could raise prices for consumers and sideswipe stock prices.

Even central banks, which normally stay above the fray of trade spats, are weighing in. "A number of participants reported about their conversations with business leaders around the country and reported that trade policy has become a concern," Federal Reserve Chairman Jerome Powell said this week, while cautioning that trade issues haven't changed the Fed's outlook. The Bank of England warned Thursday that increased protectionism could have a "significant negative impact" on global growth.

The Trump administration is framing the move as a major turning point in U.S.-China relations. It followed a seven-month investigation by USTR into allegations China violates U.S. intellectual property, under the seldom-used section 301 of the 1974 Trade Act. The U.S. concluded China engages in a range of violations, including policies that force American companies to transfer technology and the accessing of trade secrets through hacking, said Eissenstat.

The initial Chinese response may not be as severe as many fear but the conflict could easily escalate, said Robert Manning, an expert on U.S.-China relations at the Atlantic Council in Washington.

"What you're probably going to get from the Chinese is a low-key response to try to negotiate their way out of it," Manning said. "I just worry if it gets really ugly, they may go for the nuclear option."

He says nuclear option would be to sell a "couple hundred billion" in U.S. Treasuries, which would tank markets and raise U.S. interest rates.

Trump tried to make it clear he wasn't trying to provoke China or its leader, President Xi Jinping.

"I view them as a friend. I have tremendous respect for President Xi," Trump said. But, the U.S.'s trade deficit with China is "the largest deficit in the history of our world."

The president is "exactly right" to pursue the tariffs, Schumer said. "I want to give him a big pat on the back," he added, "I'm very pleased that this administration is taking strong action to get a better deal on China."

Trump's actions represent a "seismic shift from an era dating back to Nixon and Kissinger, where we had as a government viewed China in terms of economic engagement," White House trade adviser Peter Navarro told reporters on Thursday. "That process has failed."

"The problem is that with the Chinese in this case, talk is not cheap. It has been very expensive for America," said Navarro. "Finally the president decided that we needed to move forward."

Commerce Secretary Wilbur Ross predicted a strong stand on trade would bring concessions without escalating into a broader conflict. 'We will end up negotiating these things rather than fighting over them, in my view," Ross said.

Before the tariffs become final, there will be a 30-day comment period, the White House said. Trump also directed his officials to pursue a World Trade Organization complaint against China for discriminatory licensing practices.

It will be Trump's first trade action directly aimed at China, which he has blamed for the hollowing out of the American manufacturing sector and the loss of U.S. jobs. The Trump administration is also increasingly signaling it will exclude allies such as the European Union and Brazil from tariffs on steel and aluminum that take effect Friday, suggesting the U.S. is more interested in raising pressure on China, the world's biggest producer of both commodities.

China's Ministry of Commerce has cautioned against the U.S. taking measures "detrimental to both sides." The nation strongly opposes such unilateral and protectionist action, and will take "all necessary measures" to firmly defend its interests, the ministry said in a statement on its website.

"If Trump really signs the order, that is a declaration of trade war with China," said Wei Jianguo, former vice commerce minister and now an executive deputy director of the China Center for International Economic Exchanges, a government-linked think tank.

"Fifty billion in tariffs against China, if that is what the U.S. moves ahead with, is serious money. Even so, the impact on China's GDP would still be just a fraction of a percent off the growth rate," Tom Orlik, chief Asia economist for Bloomberg Economics, wrote in a note. "The greater risk comes to China's long-term development trajectory, if the rise of economic nationalism impedes their march up the value chain."

"China is not afraid, nor will it dodge a trade war," Wei said. "We have plenty of measures to fight back, in areas of automobile imports, soybean, aircraft and chips. On the other hand, Trump should know that this is a very bad idea, and there will be no winner, and there will be no good outcome for both nations."

Chinese Premier Li Keqiang said this week that the nation will further open its economy, including the manufacturing sector, and pledged to lower import tariffs and cut taxes. In opening manufacturing further, China won't force foreign companies to transfer technology to domestic ones and will protect intellectual property, he said.

Bloomberg Economics estimates a global trade conflagration could wipe $470 billion off the world economy by 2020.

(This story has not been edited by NDTV staff and is auto-generated from a syndicated feed.)
Comments
Donald TrumpDonald Trump China