US has made clear it opposes the purchase of the Russian S-400 system, giving Turkey until July 31 to give up the deal, which it considers incompatible with Ankara's participation in the F-35 fighter jet programme. 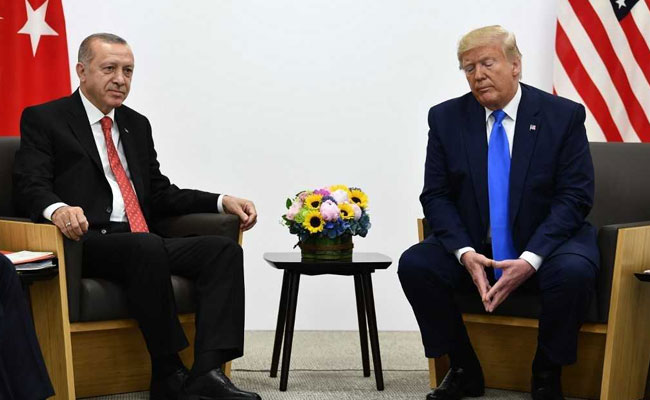 Turkey's purchase of a major Russian missile defence system is "a problem", US President Donald Trump told his Turkish counterpart in a meeting on the sidelines of the G20 on Saturday.

Washington has made clear it opposes the purchase of the Russian S-400 system, giving Turkey until July 31 to give up the deal, which it considers incompatible with Ankara's participation in the F-35 fighter jet programme.

And Trump reiterated the position in talks with President Recep Tayyip Erdogan in Japan's Osaka where the G20 summit is being held.

"It's a problem, there's no question about it," Trump said.

But he added that Turkey "has been a friend of ours... We're a big trading partner. We're going to be much bigger."

Washington has said that if by July 31 Turkey does not give up on the S-400 system, Ankara would be blocked from purchasing F-35 fighter jets and Turkish pilots currently training in the US would be expelled.

The purchase has raised eyebrows among Turkey's NATO allies and provoked anger in Washington, which expected Ankara to opt for the American Patriot air defence system instead.

But Turkey has remained committed to the purchase, with Erdogan saying earlier this month: "We have completed the business. God willing, the system will be delivered to our country next month."

Meeting President Vladimir Putin, Erdogan said the deal with Russia was "of prime importance" to Turkey, showing no signs of backtracking on the deal.