Donald Trump said on Sunday that there will be no deal to legalize the status of young adult immigrants called Dreamers. 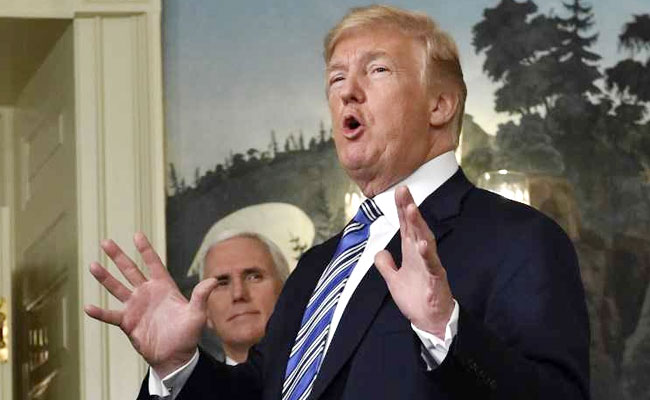 Washington: President Donald Trump said on Sunday that there will be no deal to legalize the status of young adult immigrants called Dreamers and he said the U.S.-Mexico border is becoming more dangerous.

After tweeting a "Happy Easter" message on Twitter, he said: "Border Patrol Agents are not allowed to properly do their job at the Border because of ridiculous liberal (Democrat) laws like Catch & Release. Getting more dangerous.

"Caravans' coming. Republicans must go to Nuclear Option to pass tough laws NOW. NO MORE DACA DEAL!" he wrote, adding a threat to kill the North American Free Trade Agreement which is being renegotiated with Mexico and Canada.

DACA, OR Deferred Action for Childhood Arrivals, is a program created in 2012 under Democratic former President Barack Obama that Trump sought to rescind last autumn.

Designed for people brought to the United States as children by parents who were undocumented immigrants, the program shielded them from deportation and gave them work permits.

Trump had said he was open to a deal with congressional Democrats who want to protect DACA in exchange for funding to build a U.S.-Mexico border wall, a campaign trail promise.

He insisted during his 2016 White House run that Mexico would pay for the wall, something the Mexican government has repeatedly rejected.

Mexico's presidential front-runner, Andres Manuel Lopez Obrador, launched his campaign close to the border on Sunday demanding respect for Mexicans and signaling he may take a harder line toward Trump if he wins the July 1 election.

"Mexico and its people will not be the pinata of any foreign government," Lopez Obrador said in a speech in Ciudad Juarez, Mexico, which borders El Paso, Texas. "It's not with walls or use of force that you resolve social problems."

Whether Trump will stick to his guns on DACA is unclear. Trump last month threatened to veto a spending bill because it did not address the fate of Dreamers and did not fully fund his border wall but he ultimately signed the bill.

In the months after Trump took office, apprehensions of illegal crossers along the U.S.- Mexico border dropped from more than 42,400 arrests in January 2017 to a low of around 15,700 in April, according to U.S. Customs and Border Protection data. Since then, the number of arrests has risen and in the first months of 2018 was above Obama administration levels.

"Mexico has got to help us at the border," the president, who is spending Easter at his Mar-a-Lago resort in Florida, told reporters on his way into an Easter church service. "A lot of people are coming in because they want to take advantage of DACA. They had a great chance. The Democrats blew it."

Trump's DACA tweets came after a report on the Fox New Channel's Fox & Friends program, one of his favorites, that a "caravan" of mostly Honduran migrants was crossing Mexico and headed to the United States, "either illegally or by asking for asylum."

In the town of Ixtepec, more than 1,500 men, women and children from Honduras, El Salvador and Guatemala waited in a sweltering warehouse on Saturday, mattresses rolled and bags packed, as local authorities and immigration officials from Mexico's federal government organized 15 buses to take them to their next stop on the long journey north.

By traveling together, the immigrants hope to protect themselves from the crime and extortion that makes the route through Mexico dangerous. They say some but not all of them will seek asylum if they reach the United States.

Gina Garibo, a member of Pueblo Sin Fronteras traveling with the migrants, said the group would hold a meeting to discuss Trump's statements on Sunday and stressed that the caravan's aim was to protect vulnerable people.

"The main people here are fleeing criminal violence, political violence, in their country and this allows us to save lives," she said in response to Trump's comments.

A guest on Sunday's Fox & Friends show, Brandon Judd, head of the National Border Patrol Council union, said illegal immigrants benefit from the "catch and release" program that Trump referenced in his tweet. Under it, they can be freed while awaiting court hearings if detained in the United States.

If recent border crossers do not claim asylum, they can usually be deported quickly. But if they say they fear targeted violence or persecution in their home countries, they can begin the long process of petitioning for asylum in immigration court.

Trump said on Twitter on Sunday that Mexico is doing "very little, if not NOTHING," to stop the flow of people across the southern border. "They must stop the big drug and people flows, or I will stop their cash cow, NAFTA. NEED WALL!"

"An inaccurate news report should not serve to question this strong cooperation. Upholding human dignity and rights is not at odds with the rule of law. Happy Easter," he said in a tweet.

Promoted
Listen to the latest songs, only on JioSaavn.com
Mexico deported some 80,000 people in 2017, down from about 160,000 in 2016, official statistics show. The vast majority were from Central American nations. The drop reflects fewer Central Americans crossing the country last year.
© Thomson Reuters 2018