The White House said in a statement Trump granted full pardons to First Lieutenant Clint Lorance and Major Mathew Golsteyn, and ordered that the rank Edward Gallagher held before he was convicted in a military trial this year be restored. 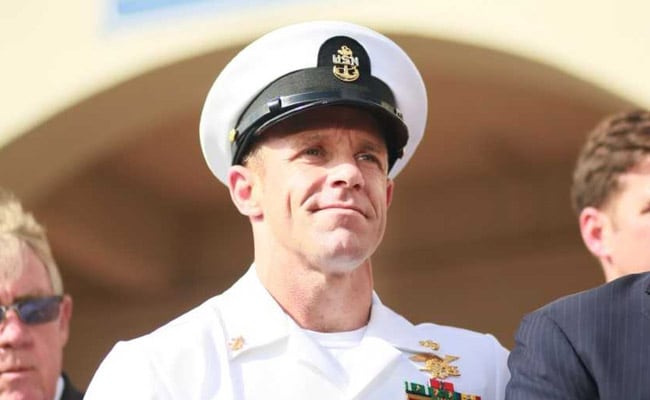 Edward Gallagher is accused of taking a picture with a corpse and shooting two civilians in Iraq.

U.S. President Donald Trump on Friday pardoned two Army officers accused of war crimes in Afghanistan and restored the rank of a Navy SEAL platoon commander who was demoted for actions in Iraq, a move critics have said would undermine military justice and send a message that battlefield atrocities will be tolerated.

The White House said in a statement Trump granted full pardons to First Lieutenant Clint Lorance and Major Mathew Golsteyn, and ordered that the rank Edward Gallagher held before he was convicted in a military trial this year be restored.

"For more than two hundred years, presidents have used their authority to offer second chances to deserving individuals, including those in uniform who have served our country. These actions are in keeping with this long history," the statement said.

A Pentagon spokesperson said the Department of Defense has confidence in the military justice system.

"The President is part of the military justice system as the Commander-in-Chief and has the authority to weigh in on matters of this nature," the spokesperson said.

In recent weeks, Pentagon officials had spoken with Trump about the cases, provided facts and emphasized the due process built into the military justice system.

In 2013, prosecutors accused Lorance of illegally ordering the fatal shootings of two men on motorcycles while on patrol in Afghanistan's Kandahar province. He was found guilty of two counts of murder.

Last year, Golsteyn, an Army Green Beret, was charged with murdering an Afghan man during a 2010 deployment to Afghanistan.

Gallagher, a decorated SEAL team platoon leader, was accused of committing various war crimes while deployed in Iraq in 2017.

In July, a military jury acquitted him of murdering a captured Islamic State fighter by stabbing the wounded prisoner in the neck, but it convicted him of illegally posing with the detainee's corpse. That had led to his rank being reduced.

Golsteyn received word of his pardon from Trump, who spoke with him by telephone for several minutes, Golsteyn's attorney Phillip Stackhouse said in a statement.

"Our family is profoundly grateful for the president's action. We have lived in constant fear of this runaway prosecution," Golsteyn was quoted saying in the statement.

"With this utterly shameful use of presidential powers, Trump has sent a clear message of disrespect for law, morality, the military justice system, and those in the military who abide by the laws of war," Hina Shamsi, director of the ACLU's National Security Project, said in a statement.

In May, Trump talked about how he was considering pardons for U.S. troops charged with war crimes, a move he acknowledged would be controversial but that he said was justified because they had been treated "unfairly."

The overwhelming majority of pardons are granted to people who have already been convicted and served time for a federal offence.

But presidents have occasionally granted pardons preemptively to individuals accused of or suspected of a crime.

The most famous such case was the blanket pardon President Gerald Ford bestowed on his predecessor, Richard Nixon, after Nixon's resignation during the Watergate scandal in 1974.