William Taylor Jr., the acting ambassador to Ukraine, testified Wednesday about a previously undisclosed July 26 phone call between Trump and Gordon Sondland, the U.S. ambassador to the European Union, in which the president asked about "the investigations" he had sought into political rivals. 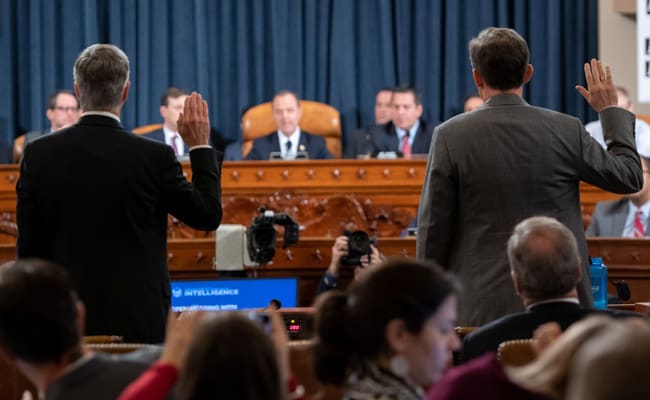 The first day of public impeachment hearings unearthed new evidence potentially implicating President Donald Trump more directly in a scheme to center American policy toward Ukraine on political investigations, heightening the stakes of upcoming proceedings that will include a set of critical witnesses.

William Taylor Jr., the acting ambassador to Ukraine, testified Wednesday about a previously undisclosed July 26 phone call between Trump and Gordon Sondland, the U.S. ambassador to the European Union, in which the president asked about "the investigations" he had sought into political rivals.

The call, overheard by one of Taylor's aides, puts the president more squarely in the middle of the swirling Ukraine scandal that has led Democrats to allege that the White House tried to withhold military assistance and an Oval Office meeting from Ukraine until Kyiv announced investigations into former vice president Joe Biden and his son, as well as an unfounded theory that Ukrainians interfered in the 2016 presidential election to hurt Trump.

"The member of my staff could hear President Trump on the phone, asking Ambassador Sondland about 'the investigations,' " Taylor told lawmakers, adding that he understood that they were following up on the matter a day after Trump spoke with Ukraine's new leader, Volodymyr Zelensky. "Ambassador Sondland told President Trump that the Ukrainians were ready to move forward." Taylor said that at the conclusion of the call, his aide asked Sondland what Trump thought of Ukraine and Sondland responded that "President Trump cares more about the investigations of Biden."

Sondland's attorney said Wednesday that his client will address Taylor's account when he testifies before Congress next week.

Trump said he had no recollection of the call.

"I know nothing about that," he said during a news conference Wednesday at the White House with Turkish President Recep Tayyip Erdogan. "First time I've heard it."

Taylor's testimony about the phone call was one of the few new revelations during the five-hour opening impeachment hearing that ended with Democrats and Republicans more firmly entrenched behind their established battle lines.

While the testimony of Taylor and Deputy Assistant Secretary of State George Kent presented a damning public account of a president using his office to advance his political interests, Republican lawmakers remained steadfast in defending Trump as he faced his greatest political threat yet.

Several pushed to hear from the anonymous whistleblower whose report documenting concerns about Trump's alleged wrongdoing toward Ukraine ultimately led to the impeachment probe.

"I move that we subpoena the whistleblower," Rep. Michael Conaway, R-Texas, said near the beginning of the testimony.

Democrats, who later voted down the GOP attempt to question the whistleblower, have announced additional witness testimony slated for next week, including a high-profile hearing featuring Sondland.

They also scheduled a Friday closed-door deposition of David Holmes, the aide to Taylor who overheard Sondland's alleged call from a restaurant in Kyiv with Trump.

The president lashed out against the impeachment process throughout the day, a venting session that began on Twitter and continued during his meetings at the White House with Erdogan.

"This is a sham, and it shouldn't be allowed," Trump said during the news conference. "I want to find out who is the whistleblower."

While Trump claimed that he did not watch the hearings, it was clear that lawmakers were playing to the cameras as the impeachment process that began in September entered its most public phase yet.

Republicans placed placards in the hearing room, including one with a partial quote from Rep. Al Green, D-Texas, who said on television this year that "I'm concerned if we don't impeach this president, he will get reelected." Several GOP lawmakers occasionally raised their voices and gesticulated as they questioned the witnesses or raised objections to Democrats' handling of the process.

Democrats displayed a large screen with a video clip from an Oct. 17 news conference by acting White House chief of staff Mick Mulvaney, where he said that Trump engaged in a quid pro quo conditioning almost $400 million in military aid for Ukraine on an investigation into Democrats. He later accused the media of distorting what he said.

During the hearing, Democrats highlighted the lengthy, nonpartisan r&#233;sum&#233;s of Kent and Taylor, who have served the country for decades. Taylor, a decorated Vietnam War veteran, received the bulk of Democratic questioning, speaking in a slow and serious manner as he described his concern that Trump and his personal attorney Rudy Giuliani had placed their political and personal concerns ahead of the United States' national security interests.

"The official foreign policy of the United States was undercut by the irregular efforts of Mr. Giuliani," Taylor said.

Republican lawmakers countered that Trump should not be impeached because he eventually released his freeze on the military assistance and met face to face with Zelensky without Ukraine announcing the investigations he had requested into the Bidens and the 2016 election. The aid was released Sept. 11, shortly after Congress was informed about the whistleblower's report.

Republicans also described the witnesses as unelected bureaucrats with no direct information about Trump's intentions. They emphasized that neither Kent nor Taylor have met or spoken with Trump.

"The latest 'evidence' is an anonymous staffer who told someone he overheard someone else talking to POTUS on the phone," she said in a statement Wednesday. "All the 'evidence' in this case is 2nd and 3rd hand hearsay."

Democrats pushed back against that argument, pointing out that the White House has blocked testimony from key witnesses with firsthand information, including Mulvaney and former national security adviser John Bolton.

Overall, Democrats said the hearing bolstered their case that Trump abused his power, validating the party's strategy of relying on credible and experienced diplomats to shine a spotlight on alleged wrongdoing in the Oval Office.

Both Taylor and Kent repeatedly contradicted key GOP talking points as Republicans sought ways to stand up for Trump. In an exchange with Rep. Jim Himes, D-Conn., Kent testified that Trump's request that Ukraine investigate the Bidens was not a coordinated anti-corruption strategy that fell in line with a years-long U.S. effort to reduce corruption in that country.

"I do not think they are the same thing," Kent said.

At another point, Rep. Eric Swalwell, D-Calif., asked Kent whether it was true, as Mulvaney said, that quid pro quos happen in foreign policy "all the time." Kent said it was not.

Kent also contradicted the GOP suggestion that Ukraine may have interfered in the U.S. election, one suggestion Republicans have floated for why Trump pushed for such investigations.

Republicans, meanwhile, defended the president with a strategy that at times seemed scattershot and disorganized. The party's most dogged defender, Rep. Jim Jordan, R-Ohio, didn't get to speak until nearly four hours into the hearing, leaving it to House Intelligence Committee ranking Republican Devin Nunes of California to lead the defense of Trump.

Republican counsel Stephen Castor also got off to a slow start as he tried to get the witnesses to testify that Ukraine had a corruption problem. Kent and Taylor agreed to that but did not link Trump's specific effort targeting the Bidens to a strategy of combating corruption in Ukraine broadly. GOP commentators on Twitter criticized Castor, saying it was unclear where he was going with his questions.

"Whatever the GOP counsel is doing, it's not working. I don't under[s]tand where he's going," wrote Ari Fleischer, the former White House press secretary for President George W. Bush.

At one point, Castor sought to downplay conversations with Ukraine that took place outside the normal State Department channels of communication, saying that they could have been even more abnormal.

"This irregular channel of diplomacy, it is not as outlandish as it could be, is that correct?" Castor asked.

"It is not as outlandish as it could be, I agree," Taylor conceded, with a chuckle.

Castor did get Kent to elaborate on his serious concerns about alleged corruption surrounding a natural gas company that hired Hunter Biden to sit on its board while his father was in office - but both diplomats testified they saw no evidence the vice president did anything wrong when he pushed to oust a Ukrainian prosecutor who was accused of being corrupt and who had investigated the company.

Trump and Giuliani have pushed for Ukraine to open investigations into both Bidens over Hunter's role with the company, Burisma.

At no point during the hearing did Republicans provide a clear answer as to why Trump withheld the aid only to release it after a whistleblower came forward with a report that was flagged to Congress. But Democrats were also not able to surface evidence directly linking Trump to a strategy of withholding the funding and the White House visit in exchange for the investigations.

The result was a hearing where neither side budged from the arguments they entered the day making.

Democrats have scheduled testimony from several additional witnesses, many of whom have already testified privately that they were bewildered and concerned by Trump's decision to withhold the aid over the summer. Marie Yovanovitch, a former U.S. ambassador to Ukraine who Kent said was targeted by a Giuliani-led "smear campaign," is scheduled to testify Friday.

Sondland, who is slated to testify on Wednesday, has previously amended his closed-door testimony to confirm that he told Ukrainian officials that military aid and an Oval Office meeting were conditioned on a public announcement of corruption investigations.

Taylor's testimony raises the stakes for Sondland, who will certainly be asked about the July 26 phone call in which Trump allegedly inquired about "investigations."