US President Donald Trump's visit to Israel and the Palestinian territories is part of his first trip abroad as president, and follows an initial leg in Saudi Arabia, where he urged Islamic leaders to confront extremism. 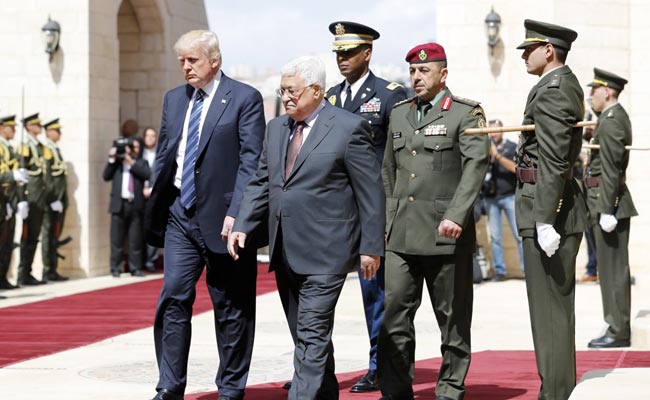 Bethlehem, Palestinian Territories: Donald Trump made the short trip from Jerusalem to Bethlehem Tuesday to meet Mahmud Abbas, who was hoping to convince the unpredictable US president to remain committed to an independent Palestinian state.

His talks in Bethlehem with the Palestinian president came after Trump on Monday made a heavily symbolic visit to the Western Wall in Jerusalem and met Israeli Prime Minister Benjamin Netanyahu.

Later Tuesday, Trump will return to Jerusalem to visit the Yad Vashem Holocaust memorial and give a speech at the Israel Museum before wrapping up his two-day stop.

He was expected to comment on the bomb blast at a concert in the British city of Manchester on Monday night that killed 22 people.

White House spokesman Sean Spicer said on Twitter that Trump's national security team was "providing updates" to the president on the situation.

Trump's visit to Israel and the Palestinian territories is part of his first trip abroad as president, and follows an initial leg in Saudi Arabia, where he urged Islamic leaders to confront extremism.

He arrived in Bethlehem by motorcade, crossing a checkpoint at Israel's controversial separation wall, and was greeted by Abbas and other dignitaries outside the city's presidential palace.

Trump has spoken of reviving long-stalled peace efforts between the Israelis and Palestinians, but few specifics have emerged of how he intends to do so.

Before dinner at Netanyahu's residence on Monday, Trump avoided delving into details.

"I've heard it's one of the toughest deals of all, but I have a feeling that we're going to get there eventually, I hope," he said.

Earlier Monday, Trump also lashed out at Iran, Israel's arch-enemy, saying it should never be allowed to have nuclear weapons and criticising Tehran for supporting "terrorists" -- a reference to militant groups it backs in the region.

In Tehran on Monday, Iran's newly re-elected President Hassan Rouhani ridiculed US strategy in the Middle East, dismissing Trump's summit with Arab leaders in Saudi Arabia as "just a show".

Security was tight for Trump's journey to Bethlehem, a 20-minute drive from Jerusalem but located across Israel's separation wall.

The wall is part of a project begun in 2002 during the second Palestinian intifada, or uprising, that is to extend some 700 kilometres (450 miles) once completed.

It is a stark symbol for Palestinians of Israel's 50-year occupation of the West Bank, and in Bethlehem the wall has been covered with graffiti and street art.

Bethlehem also holds deep significance as the site where Christians believe Jesus was born and welcomes thousands of pilgrims each year for Christmas.

A banner hung in the city said "the city of peace welcomes the man of peace" along with photos of Abbas and Trump.

Hossam Zomlot, an aide to Abbas, said that "if President Trump wants to mediate and leads us to a historic agreement, a major agreement, we are ready to be his partners".

Their talks come with hundreds of Palestinians in Israeli jails on hunger strike since April 17, and activists were hoping to display banners in Bethlehem to drawn Trump's attention to it.

On Monday, Palestinians also held a general strike in support of the prisoners.

Clashes broke out near a checkpoint between Jerusalem and Ramallah involving several hundred stone-throwing youths and Israeli soldiers who responded with rubber bullets and tear gas, leaving at least one wounded.

On Monday night in the Gaza Strip, the Palestinian enclave run by Abbas's rivals Hamas, the Islamist movement organised a demonstration to denounce its labelling as a "terrorist" group by many Western governments, including the United States.

Trump and Abbas met earlier this month at the White House.

Trump initially sparked deep concern among Palestinians when he backed away from the long US commitment to a two-state solution to the conflict.

Meeting Netanyahu in Washington in February, he said he would support a single state if it led to peace, delighting Israeli right-wingers who want to see most of the West Bank annexed.

During his election campaign, Trump also advocated breaking with decades of precedent and moving the American embassy from Tel Aviv to Jerusalem, alarming Palestinians.

He has since said the move was still being looked at.

At the same time, he urged Israel to hold back on settlement building in the West Bank, a longstanding concern of Palestinians and much of the world.

The most high-profile moment of Trump's stay in Jerusalem was his visit to the Western Wall, one of the holiest sites in Judaism.

He became the first sitting US president to visit the site in the Israeli-annexed east of the city.

He was not accompanied by any Israeli leaders during the visit.

Allowing them to do so could have led to accusations that Washington was implicitly recognising Israel's unilateral claim of sovereignty over the site, which would break with years of US and international precedent.

The status of Jerusalem is ultra-sensitive and has been among the most difficult issues in Israeli-Palestinian peace talks, stalled since April 2014.

Israel occupied the West Bank, including east Jerusalem, in the Six-Day War of 1967.

It later annexed east Jerusalem in a move never recognised by the international community and claims the entire city as its capital.

The Palestinians see east Jerusalem as the capital of their future state.

After Israel and the Palestinian territories, Trump will head to the Vatican, and to Brussels and Italy for NATO and G7 meetings.

(Except for the headline, this story has not been edited by NDTV staff and is published from a syndicated feed.)
Comments
US President Donald TrumpPalestinian leader Mahmud AbbasIsrael Palestine peace talks