Catalonia's new separatist government will be sworn in Saturday, the regional presidency announced. 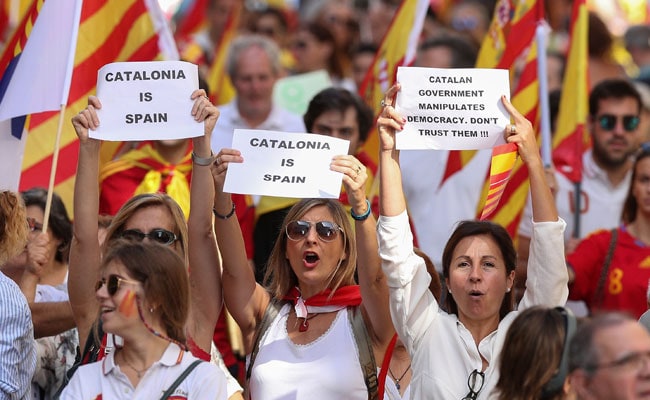 In 2017, there were repeated calls for the autonomy of Catalonia. (File)

Barcelona: Catalonia's new separatist government will be sworn in Saturday, the regional presidency announced, which will spark the automatic end of Madrid's direct rule over the region.

Before being toppled by a no-confidence vote in parliament on Friday, Prime Minister Mariano Rajoy gave the green light to a new executive in Catalonia that does not include jailed or exiled former ministers.

The new ministers will take up their posts on Saturday, the regional government announced.

This will automatically lift direct rule imposed by Madrid after Catalonia's now-deposed leaders tried to break from Spain in October.

The central government last month recognised the powers of newly-elected Catalan president Quim Torra but refused to ratify his choice of councillors because four of them face charges linked to the failed independence drive, calling their nomination "a new provocation".

But earlier this week, Torra nominated a new administration which did not include them.

The regional government also said Friday that Torra had filed an official complaint against Rajoy for abuse of power for having blocked the formation of his first government, an "arbitrary decision" without "legal basis," according to him.

(This story has not been edited by NDTV staff and is auto-generated from a syndicated feed.)
Comments
CataloniaSpain