"Just Cried": Doctor Who Was Dragged, Screaming From United Airlines 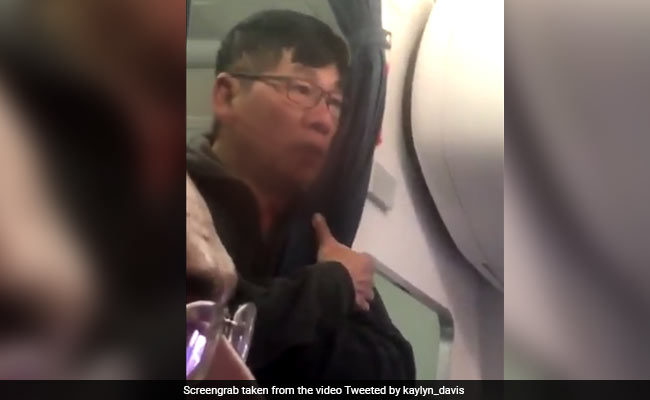 David Dao, a doctor, was hospitalised after police dragged him from United Airlines plane.

Exactly two years after passenger David Dao was dragged, screaming, from his seat on a United Airlines flight, he has broken his silence, saying he has shed many tears over the incident.

Dao's case captured worldwide attention in 2017 when he was forcibly removed from an overbooked flight at Chicago's O'Hare International Airport, resulting in a concussion, a broken nose and two missing teeth, according to ABC News. Dao, who has not spoken publicly about the incident since it happened, said Tuesday on ABC's "Good morning America" that when he first saw the video footage, "I just cried."

Still, Dao said he has forgiven the airline as well as the security agents who dragged him down the aisle and back into the airport terminal.

Dao said he decided to speak out publicly as a way to thank those who stood behind him.

The doctor said he boarded the plane April 9, 2017, preparing to head home to Kentucky, where he was planning to open a free clinic for U.S. veterans, according to ABC News. He didn't make it. The flight was overbooked and, when he refused to give up his seat, he was dragged off the plane.

Dao told ABC News that he never expected the encounter to get physical but, once it did, everything escalated "fast."

Fellow passenger Tyler Bridges told The Washington Post in 2017 that travelers were informed they would be given vouchers to rebook, but when no one agreed, the airline started selecting people and asking them to leave.

The Washington Post's Avi Selk reported it this way at the time:

A young couple was told to leave first, Bridges recalled. "They begrudgingly got up and left," he said.

Then an older man, who refused.

"He says, 'Nope. I'm not getting off the flight. I'm a doctor and have to see patients tomorrow morning,'" Bridges said.

The man became angry as the manager persisted, Bridges said, eventually yelling. "He said, more or less, 'I'm being selected because I'm Chinese.'"

A police officer boarded. Then a second and a third.

Bridges then began recording, as did another passenger - as the officers leaned over the man, a lone holdout in his window seat.

"Can't they rent a car for the pilots?" another passenger asks in the videos.

Then the man, out of frame, screams.

One of the officers quickly reaches across two empty seats, snatches the man and pulls him into the aisle.

"My God!" someone yells - not for the first time.

He goes limp after hitting the floor.

"It looked like it knocked him out," Bridges said. "His nose was bloody."

His glasses nearly knocked off his face, the man clutches his cellphone as one of the officers pulls him by both arms down the aisle and off the plane.

"This is horrible," someone says.

"What are you doing? No! This is wrong."

And with that, Bridges said, four United employees boarded and took the empty seats.

Dao told ABC News on Tuesday that he woke up in a hospital and, for a while, did not know his story had gone viral.

Then, amid widespread outcry, slipping stock prices and a settlement with the airline, he said the media attention became too much for him to handle. "Get to the point, I have to hide," he told ABC News, explaining that he had to go underground. "I stay for months - months in house."

United Airlines said in a statement Tuesday to The Post that the incident was "a defining moment" for the company.

"It is our responsibility to make sure we as a company and all of our 90,000 employees continue to learn from that experience," Megan McCarthy, a spokeswoman for the airline, said in the statement.

"The changes we have implemented since that incident better serve our customers and further empower our employees. This year, we are focused more than ever on our commitment to our customers, looking at every aspect of our business to ensure that we keep their best interests at the center of everything that we do. As our CEO Oscar Munoz has said, we at United never want anyone in the United family to forget the experience of Flight 3411. It makes us a better airline, a more caring company and a stronger team."

In the interview with ABC News, Dao said he is glad the airline has taken action.

"The most important thing is the accident turned out the positive way," he said.