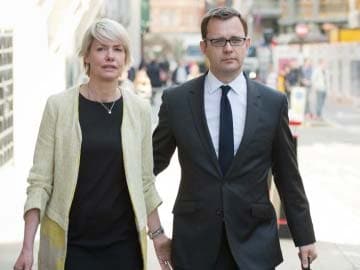 Former News of the World editor and Downing Street communications chief Andy Coulson (R) and his wife Eloise leave the phone-hacking trial at the Old Bailey court in London on April 14, 2014.

London: Andy Coulson, a former editor of the defunct News of the World tabloid and en ex-aide to British Prime Minister David Cameron, was sentenced to 18 months in prison on Friday for his role in a phone-hacking scandal that brought down Rupert Murdoch's newspaper.

A judge at the Old Bailey court in London sentenced Coulson after he was found guilty on June 24 of conspiracy to intercept voicemails for stories in the tabloid following a marathon eight-month trial.

Promoted
Listen to the latest songs, only on JioSaavn.com
The four had all earlier pleaded guilty to phone hacking.

Cameron was last week forced to make an embarrassing public apology after the conviction of Coulson, who was his communications director from 2007 until his resignation in 2011.