Cuba Changing, But Only Slowly, Since Barack Obama's Policy Shift 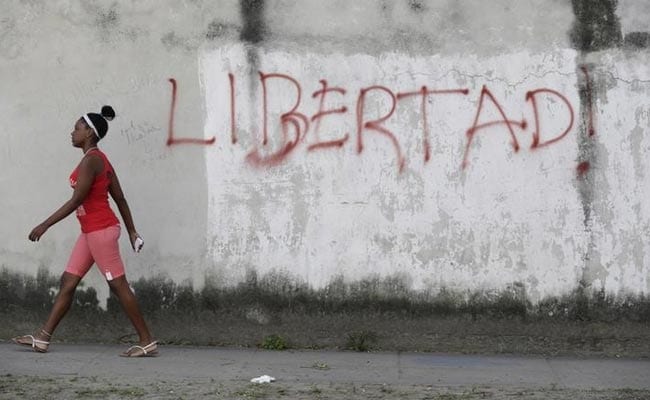 A woman walks near graffiti that reads 'freedom' in Havana. (Reuters photo)

Havana: Saul Berenthal has waited for decades for a chance to do business in Cuba. Despite the astonishing breakthroughs in U.S.-Cuban relations under President Barack Obama, he must wait some more.

Berenthal and business partner Horace Clemmons of Alabama are close to becoming the first U.S. businessmen to manufacture in Cuba with a plan to build low-cost tractors designed for Cuban farms, largely run by private cooperatives.

Their project has U.S. approval and Cuba's Communist government has given positive signals about the proposed plant but has yet to bestow permission.

"It's a little bit of a test of loyalty. Are we willing to go through obstacles to achieve what we believe is a good thing for the Cubans and ourselves?" said Berenthal, who was born in Cuba in 1944 and left for the United States as a student in 1960, a year after Fidel Castro's revolution.

After more than half a century of antagonism between the two countries, Obama has redefined relations with Cuba in the last 15 months, and Cuba is changing. But its leaders are wary of moving too quickly.

"What is perceived on the outside as slow progress is really the way of Cubans assuring themselves of the trust that is necessary to be built," Berenthal said.

Obama arrives in Havana on Sunday for a historic visit that seals a rapprochement he and Cuban President Raul Castro agreed in December 2014 after 18 months of secret negotiations.

Since then, Havana has changed noticeably. The number of U.S. visitors soared 77 percent in 2015, swarming hotels and restaurants that have been booked to capacity.

Obama this week issued sweeping regulations to promote even more U.S. travel and trade to Cuba. It was the fifth time he has used executive powers to boost ties with Cuba, sidestepping the Republican-controlled Congress which has refused to lift a 54-year-old economic embargo against the island.

Cuba's government has yet to fully reciprocate. Cuba did agree to roaming deals with U.S. telecommunications operators and restoring scheduled commercial airline service, two deals that bring more revenue to the government.

When it comes to Obama's overtures to the Cuba's small but growing private sector, however, the government has been more deliberate. It has yet to accept U.S. sales of farming equipment and construction materials to private businesses, which were authorized by Obama.

Market-style reforms, introduced by Raul Castro in 2011 to "update" Cuba's socialist model, have been implemented haltingly, even reversed in some areas. The government recently attempted restoring price controls on fresh food markets in Havana.

Many traits of communism remain. Political dissent is repressed, commercial property cannot be bought and sold and the government still controls imports and exports.

There is no wholesale market for most private enterprises, forcing shopkeepers to buy inventory at state retail prices or resort to trickery or the black market.

"Cuba has already changed, but needs more," said Niuris Higueras, owner of the Atelier restaurant, one of the trendiest spots in Havana's dining scene. She said business grew 50 percent over the past year.

"We need to link up with the U.S. market," Higueras said. "There needs to be more access to U.S. products here in Cuba. We need Home Depot, a Walmart, a Costco. A Restaurant Depot would be fabulous."

While the ice has been broken on commerce, Castro insists there will be no change to one-party rule.

U.S.-backed dissidents are still detained for attempting unauthorized political demonstrations and opponents of Obama's opening to Cuba say he has rewarded Castro without receiving concessions in return.

The White House counters that helping stimulate a vibrant private sector is good for ordinary Cubans and offers a more promising path toward political change than the decades-old policy of isolation.

While the date of Dec. 17, 2014, marks the most significant turning point in U.S.-Cuban relations, the Obama policy that has so far had most impact on the lives of ordinary Cubans was implemented in 2009, just three months into his presidency.

It was then he ordered the lifting of travel restrictions on Cuban-Americans visiting relatives in Cuba and the removal of limits on remittances to relatives on the island.

Cuban-Americans can now come and go freely and send as much money as they want to their families. That has financed a boom in small businesses and home repairs and jolted the nascent real estate market.

Castro's own reforms have also helped grow the private sector. Today some 500,000 Cubans, or 10 percent of the workforce, are registered to work in private businesses, including restaurants, car repair workshops, homes rented out to tourists, beauty parlors and English language schools.

Some 70 percent of the 1-million-strong agricultural workforce is private with many Cubans working on state farms that have converted into cooperatives and owning equal stakes in the business.

John Kavulich, president of the U.S.-Cuba Trade and Economic Council, which has been tracking Cuba for more than 20 years, says the changes have lifted expectations, especially inside the budding middle-class.

"There is now additional pressure from within for structural changes to the ideological foundation of the country. Cuba must do more than reform the commercial and economic sectors of the country. It must aggressively redefine the revolution," Kavulich said.

While Cuban dissidents and Obama's critics at home prioritize the issue of human rights, others are more concerned about economic growth and better living conditions.

"No one is talking about the visit in terms of democracy, human rights or the opposition. There is still no culture around freedom of expression," Anaida Gonzalez, a retired nurse in central Camaguey province, said in a telephone interview.

"People have too many problems in their daily lives. What they want is for their lives to improve and they associate that with the embargo," she said.

Most Cubans live on state salaries that average $25 a month plus a monthly ration card that provides about a week's worth of food and household supplies.

"It would be a mistake to assume most Cubans prioritize political questions and are scared to express themselves," said Carlos Alzugaray, a retired Cuban diplomat and professor specializing in U.S.-Cuban relations. "They hope to live better. Change, political and economic, is coming to Cuba anyway, but on our own terms."