Signs of blood thickening and clotting were being detected in different organs by doctors from different specialties. This would turn out to be one of the alarming ways the virus ravages the body, as doctors there and elsewhere were starting to realize. 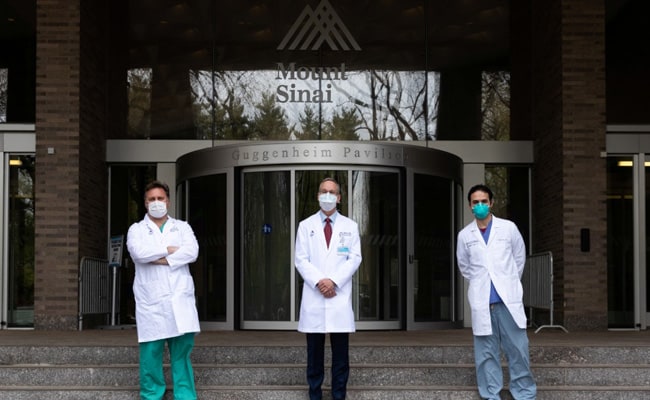 Signs of blood thickening and clotting were being detected in different organs by doctors from different specialties. This would turn out to be one of the alarming ways the virus ravages the body, as doctors there and elsewhere were starting to realize.

At Mount Sinai, nephrologists noticed kidney dialysis catheters getting plugged with clots. Pulmonologists monitoring COVID-19 patients on mechanical ventilators could see portions of lungs were oddly bloodless. Neurosurgeons confronted a surge in their usual caseload of strokes due to blood clots, the age of victims skewing younger, with at least half testing positive for the virus.

"It's very striking how much this disease causes clots to form," Dr. J Mocco, a Mount Sinai neurosurgeon, said in an interview, describing how some doctors think COVID-19, the illness caused by the coronavirus, is more than a lung disease. In some cases, Mocco said, a stroke was a young patient's first symptom of COVID-19.

As colleagues from various specialties pooled their observations, they developed a new treatment protocol. Patients now receive high doses of a blood-thinning drug even before any evidence of clotting appears.

"Maybe, just maybe, if you prevent the clotting, you can make the disease less severe," said Dr. David Reich, the hospital president. The new protocol will not be used on certain high-risk patients because blood thinners can lead to bleeding in the brain and other organs.

"FUNNY YOU MENTIONED THAT"

In the three weeks beginning mid-March, Mocco saw 32 stroke patients with large blood blockages in the brain, double the usual number for that period.

Five were unusually young, under age 49, with no obvious risk factors for strokes, "which is crazy," he said. "Very, very atypical." The youngest was only 31.

At least half of the 32 patients would test positive for COVID-19, Mocco said.

Meanwhile, Dr. Hooman Poor, a Mount Sinai lung specialist, found himself working a late shift with 14 patients on ventilators. The ventilator readings were not what he expected.

The lungs did not seem stiff, as is common in pneumonia. Instead, it seemed blood was not circulating freely through the lungs to be aerated with each breath.

Poor ran into a kidney doctor that night, who remarked that dialysis catheters were often getting blocked with clots.

"And I said, 'It's funny that you mentioned that because I feel like all these patients have blood clots in their lungs,'" Poor recalled.

Reich, the hospital president, told Poor about the surge in strokes seen by Mocco and said the two doctors should team up, setting off days of discussions and meetings with the hospital's department heads.

At 2:46 a.m. on Easter Sunday, Poor sent Mocco his first draft of what would become the new treatment protocol.

As their wards began to overflow with COVID-19 patients, the Mount Sinai doctors read papers describing similar findings from doctors in China's Hubei province and other hard-hit areas, and discussed them with their peers in phone calls and webinars.

Mocco called neurosurgeons he knows elsewhere in the country. At Philadelphia's Thomas Jefferson University Hospital, Dr. Pascal Jabbour had begun to see a similar surge in strokes among people with COVID-19. The way his patients' blood congealed reminded him of congenital conditions such as lupus, or certain cancers.

"I've never seen any other viruses causing that," Jabbour said.

Clotting can develop in anyone who gets very sick and spends long periods of time immobile on a ventilator, but doctors say the problem seemed to show up sooner in COVID-19 patients as a more direct consequence of the virus.

At Mount Sinai, patients in intensive care often receive the blood-thinning agent heparin in weaker prophylactic doses. Under the new protocol, higher doses of heparin normally used to dissolve clots will be given to patients before any clots are detected.

The treatment joins a growing toolbox at the hospital, where some patients are receiving the antibody-rich plasma of recovered COVID-19 patients or experimental antiviral drugs.

The American Society of Hematology, which has also noted the clotting, says in its guidance to physicians that the benefits of the blood-thinning therapy for COVID-19 patients not already showing signs of clotting are "currently unknown."

"I certainly wouldn't expect harps to play and angels to sing and people to just rip out their intravenous lines and waltz out of the hospital," said Reich. "It's likely going to be something where it just moderates the extent of the disease."