Between 8 and 12 inches (20 and 30 cm) of wet, heavy snow, some of it accompanied by thunder and lightning, were forecast for New York City 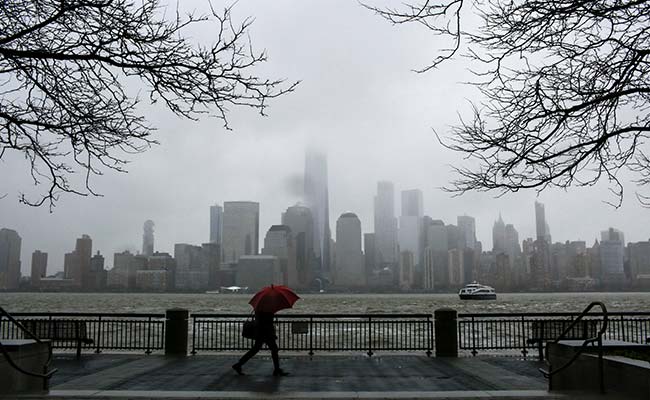 New York: The second winter storm in a week hit New York and surrounding states on Wednesday, bringing heavy snow that delayed or canceled flights and snarled traffic at evening rush hour as thousands remained without power from the last nor'easter.

Between 8 and 12 inches (20 and 30 cm) of wet, heavy snow, some of it accompanied by thunder and lightning, were forecast for New York City and surrounding New Jersey and Connecticut suburbs through Thursday morning.

Some workers were stranded with both buses and trains canceled.

"I don't know how to go home right now. I am trying to find out the way to go home," said Huseyin Aktug, a Bloomingdale's employee left stranded at Penn Station.

Up to 2 feet (60 cm) of snow was expected in some inland parts of New Jersey, New York, Connecticut and Massachusetts and 18 inches was possible in Maine.

The storm will spread with varying degrees of intensity across the Northeast, from western Pennsylvania up into New England, the weather service said.

Around half of all scheduled flights were canceled at the three major airports serving New York City, according to the tracking service FlightAware. The website said more than 2,100 flights had been delayed and 2,700 canceled, most of them in the Northeast, as of 8 p.m. EST (0100 GMT Thursday).

All schools were closed in Philadelphia, while other schools across the region canceled classes or shortened the school day ahead of the storm, local news media reported.

This week's storm was not forecast to have the hurricane-strength winds whipped up at times by the storm last week, but forecasters say strong gusts of 60 miles per hour (100 km per hour) and accumulated snow will still be enough to knock down more power lines.

Last week's storm brought major coastal flooding to Massachusetts, killed at least nine people and knocked out power to about 2.4 million homes and businesses in the Northeast.

Some 100,000 homes and businesses in the region remained without power on Wednesday.

The governors of New Jersey and Pennsylvania declared states of emergency, giving them access to support from the U.S. government if needed.

Promoted
Listen to the latest songs, only on JioSaavn.com
The Amtrak passenger train service canceled some Wednesday trains between Washington and Boston, as well as some services in Pennsylvania and other parts of the Northeast.
© Thomson Reuters 2018

(Except for the headline, this story has not been edited by NDTV staff and is published from a syndicated feed.)
Comments
Snow StormUS Northeast WeatherNew York Snow Storm