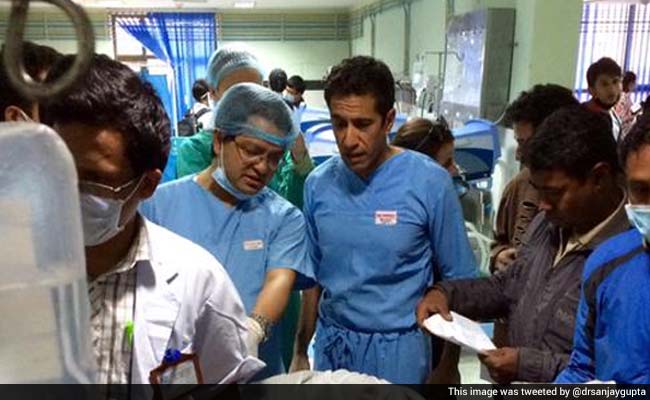 Sanjay Gupta (in scrubs, right), taking part in medical relief operations in Nepal after the earthquake in April.

CNN has launched an investigation into claims that one of its star correspondents misled viewers in a report showing his emergency medical intervention on an earthquake victim in Nepal.

Dr Sanjay Gupta, an acclaimed neurosurgeon and the network's chief medical correspondent was reporting on the devastating 7.8 magnitude quake that killed more than 8,000 people in the poor South Asian country in April, when he participated in an emergency operation on a victim.

In both a report and interviews with CNN anchors, Gupta said he had been involved in an intervention which had saved the life of an eight-year-old girl suffering from major head injuries. Gupta was shown inspecting scans of what were said to be the girl's skull prior to the surgery, and then in the operating theatre at the Bir Hospital, in central Kathmandu.

His actions, which came only two days after the tremor, were widely reported across the world. The girl was said to be suffering from a life-threatening blood clot in her brain.

The accuracy of Gupta's report has now been challenged in an investigation by the Global Press Institute, an independent organisation that trains journalists in the developing world and publishes their reports.

After speaking to doctors involved in the incident as well as patients and their families, the institute reported that Gupta had actually helped with an operation on a different patient - a 14-year-old - and that the eight-year-old named in the report had not sustained any serious injuries.

The institute also reported that CNN had published a text story before the video segment aired that correctly described the girls' injuries. Hours later, the article was updated to remove one of the girls and misreport the others' injuries. The modified article reflected the reporting in the broadcast story.

On Wednesday, Gupta attempted to clarify the situation on the network's morning news program, New Day, conceding that the patient he operated on "may not have been this eight-year-old girl but rather separately a 14-year old girl in that same hospital".

He described the scene at Bir Hospital as complete chaos in the aftermath of the earthquake. Amid the havoc, details may have been confused, he said.

"These facts are important to us ... we are trying to independently verify which child it was who got that operation at the time. There were many children, many people in the hospital," Gupta told viewers.

"When you report on these kinds of situations you take lots of different bits of information and you consolidate it and in the end you tell the story."

Nepal was certainly in turmoil in the days after the earthquake struck, but that should not excuse the reporting errors, said Cristi Hegranes, the founder and executive director of the San Francisco-based Global Press Institute and the publisher of Global Press Journal.

"A pretty grave mistake was made ... the excuse that things were chaotic shouldn't hold up for any journalist especially when that journalist is also performing a medical operation," Hegranes said.

The publisher said the culture of celebrity reporting raises concerns about the way foreign correspondents report abroad, Hegranes said. She argued that local journalists wouldn't have made this mistake, and that her team, comprised of local female reporters, undertook this story to "set the record straight".

"Now we know the identity of the patient on the table," she said. "I'm hopeful that this conversation can be the first of many about the role of foreign correspondents and celebrity journalists in America and how they cover the developing world."

Gupta, a former candidate for US surgeon general, said he was shown several children who were suffering brain injuries.

"We are so proud that Sanjay was one of the few reporters in Nepal to cover the earthquake, and while there was asked to help save a young victim's life. As we reported he assisted the surgeons at Bir Hospital by performing a craniotomy on a young victim. Some reporting has suggested it was not the young girl we, at the time of our own reporting in the midst of the crisis, believed her to be. We will try to verify that. Regardless, Sanjay spent a week in Nepal, helped save a young life in the operating room, and we couldn't be prouder of him. He has our full and unequivocal support."

Dr Rajiv Jha, the senior neurosurgeon at Bir Hospital who conducted the operation, told the Guardian on Wednesday that Gupta had repeatedly asked to participate in an operation, rather than been requested by medical staff to help.

"I met him that day. He said he was a reporter and a neurosurgeon too. He said 'if you need some help, I can help you'. We only had one [theatre] at the time and I had sufficient manpower," Jha said.

After "a few hours", Gupta was allowed to "assist in one of the cases", Jha said.

On CNN on Wednesday, Gupta maintained that he had been asked to intervene.

Jha also said he had been surprised to see footage of the operation broadcast as he had refused to allow CNN to bring a "big camera" into the theatre but believed a colleague of Gupta had filmed the intervention on a cellphone.

"It was never discussed with me that it would be broadcast ... He never took permission to take film," Jha told the Guardian.

There was no immediate response from CNN to the claim.

Gupta has regularly stepped in to save lives while covering a story for CNN. He treated a two-year-old boy in Iraq, and examined patients on camera after the 2010 Haiti earthquake.

Ethics experts have previously raised questions over the conflicting instincts of a physician-journalist.

Connie St Louis, director of the Science Journalism programme at City University in London, told the Guardian in April that she was "really, really worried" about the ethics of filming a journalist's medical intervention.

"As a journalist with medical training, do you really need to film the times when you get involved? There's certainly a possible confidentiality issue, as well as the potential for self-promotion. If you film the journalist doing the medical procedure, they become the story. My feeling is, why do it in Nepal when there is no way you could possibly do this in America?" she said.