Clinton wedding is leaving some feeling left out 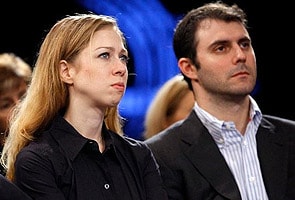 New York: So, just what does it take to score an invitation to the hottest -- not to mention most secretive -- political wedding of the summer?

Many of her parents' political allies were not invited to the wedding of Chelsea Clinton and Marc Mezvinsky.

More than a cross-country ride on a private jet, apparently.

"I'm good enough to borrow a plane from, but not good enough to be invited to the wedding?" complained one Clinton friend, who remembered the times he handed over his jet and his pilot to take Bill Clinton around the country but had not landed a coveted invitation to Chelsea Clinton's nuptials.

Next Saturday, Ms Clinton, 30, and her fiancé, Marc Mezvinsky, 32, are expected to marry in Rhinebeck, NY but not everyone these days is feeling the love.

While most friends and acquaintances of the former president and Secretary of State Hillary Rodham Clinton say they understand that the wedding is a private affair of 400 or so guests, each with a direct connection to the bride or bridegroom, some are privately grumbling about who made the cut. And the whole affair has left donors, supporters, aides and even true A-listers wondering just how inside the inner circle they really are.

"Would people who said they were close to the Clintons and not invited feel bad? Sure," said Hank Sheinkopf, a political consultant who worked on Mr Clinton's presidential re-election in 1996 (and who, for the record, was not invited). But with the hindsight of 30 years in politics, he added: "It is dangerous to presume closeness to people in power, and it is very rare when there are real, unbreakable friendships."

Mr. Sheinkopf stressed that the Clintons have always done a good job of guarding their daughter's privacy. "This is not another meeting of power for those who want to get close to the former president to figure out what they can get out of him, or the secretary of state," he said.

"Either you are a friend or you're not, and friends are defined at different levels," he added. "Anyone who knows the Clintons knows that lobbying will do no good."

But that has not stopped some people from trying, especially political supporters and fund-raisers with a sense of entitlement born from years bundling checks.

"I'm sure there are some people who are lobbying discreetly," said someone who has known the Clintons for decades. "If they're on the list, they will ballyhoo it quietly, and if they're not on the list, their noses will be out of joint. I know some people whose noses are out of joint." (Like most FOB's -- Friends of Bill -- the person did not want to be quoted by name, swearing by the wedding's code of silence.)

After all, Washington is a town that revolves around power and access to power, and Ms. Clinton's wedding has inadvertently provided the chattering class with an imprecise -- and, many say, inaccurate -- measure of where they stand in Clinton world.

"You know, when I heard about it, I was hoping to be invited," said John Catsimatidis, who owns the Red Apple and Gristedes supermarkets and has raised several million dollars for the Clintons. "But when it's only two weeks from the wedding and you don't get an invitation, you know you're not invited."

After trying to play the Washington parlor game of the moment -- "Was Alan Patricof invited?" he asked, referring to a fellow ardent Clinton supporter -- Mr. Catsimatidis played the game's second stage: rationalization. He said he did not feel too bad because "it's a small affair, and it's Chelsea's friends."

And that has become the mantra for the uninvited: It's no biggie.

Partly out of necessity, partly out of sincerity, they are trying to take it in stride. "It's not a political rally, it's not a state affair," said one longtime Clinton supporter who was not invited but was still nervous about upsetting the former president. "There are people who are elbowing and hinting and looking, but you don't go to a wedding to collect autographs."

And then, finally, there are those who cheerfully accept their lot, only wishing the bride well. They include Senator Bill Nelson of Florida, who has known Mr. Clinton since his White House days, and his daughter Nan Ellen Nelson, who got to know Ms. Clinton when they were teenagers. Ms Nelson is getting married this weekend, and the two are exchanging wedding gifts.