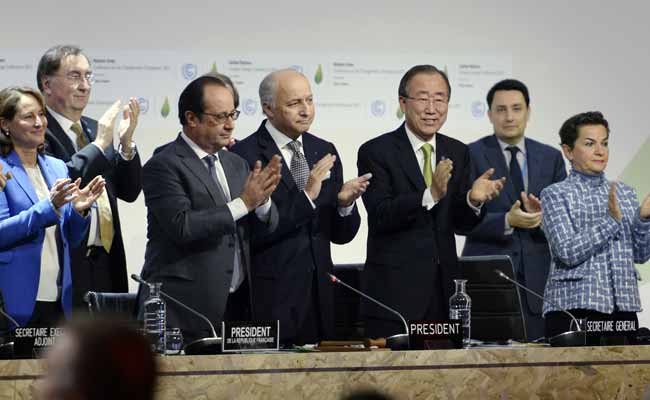 Le Bourget, France: A 195-nation wrangle that ended Saturday with a historic Paris pact to curb global warming had to be the anti-Copenhagen: as flawlessly organised as the 2009 summit was chaotic, as much a success as the other was a traumatising blow for climate diplomacy.

By nearly any measure and all accounts, France pulled it off.

From the gourmet tofu sandwiches to the subtle handling of negotiations compared by one analyst to a 12-dimensional Rubik's Cube, the French hosts of the UN climate conference have been showered with praise.

"It's the most skillful diplomacy I've seen in the more than two decades that I've been going to this kind of meetings," former US vice president Al Gore told AFP.

"It's quite eerie, I must tell you," said WWF climate expert Tasneem Essop, a veteran of the often messy 21-year process, commenting on how negotiating deadlines were being met. "It never happens."

After the fiasco of Copenhagen -- which ended with some 115 world leaders scrambling overnight to save face and cobble together a political accord -- hosting the next critical climate conference was a big risk.

Getting virtually all the world's nations to agree on transforming the energy system underlying the world economy was bound to be tricky.

But the French did not have to push hard for the assignment. "We were chosen, but I must point out that we were the only candidate," Fabius has said more than once.

It was no secret that climate change was not at the top of French President Francois Hollande's agenda when he took office in 2012.

But as the conference loomed he got personally involved.

Hollande spoke frequently and forcefully on the need to beat back the threat of climate change, and focused especially on the plight of poor and vulnerable nations, underlying the need for hundreds of billions of dollars, euros and yen in climate finance.

Two years ahead of the rendezvous, Fabius started to prepare the stage.

"I mobilised our diplomatic network, started organising international meetings, and put together my team," he told AFP in his windowless office at the sprawling conference centre on the outskirts of Paris.

The 69-year old former prime minister -- both avuncular and severe, wire-rimmed glasses often perched on the end of his nose -- made 12 trips to China, and four each to India and Saudi Arabia, historically a spoiler in climate talks.

Days before the conference opened, Fabius made rapid-fire pitstops in India, Brazil and South Africa -- all crucial for success.

The cornerstone of Fabius' team was a diminutive, silver-haired ex-professor partial to Converse sneakers.

Appointed France's top negotiator, Laurence Tubiana clocked tens of thousands of kilometres in the run up to the COP21 crisscrossing the globe to charm, coax, and cajole key actors in the climate drama.

She also managed to work in a quick appendectomy just before the gruelling conference began.

Inviting heads of state to kick-off the conference rather than to close it -- as happened in Copenhagen -- was a masterstroke, diplomats and analysts say.

In the Danish capital, ministers negotiating the deal were afraid to take decisions knowing their leaders were about to hit town, they said.

In Paris, China was the first to accept, and by the time world leaders gathered on November 30 -- barely two weeks after the worst-ever terror attack in France -- they numbered 150.

And then they went home, turning over the job of hammering out the deal to rank-and-file diplomats and ministers.

"When I later talked with the negotiators, I could remind them: 'Your boss said that we need to get a positive result'," Fabius said.

"There was no arrogance or pretentiousness," said Seyni Nafo, a negotiator from Mali and spokesperson for the Africa Group.

Experts said the successful outcome also owed a lot to France's vast diplomatic network, the second largest in the world after the United States.

"Conferences of this size only come along once or twice in a decade, and it's a complicated job to pull off," commented Camille Grand, director of the Foundation for Strategic Research in Paris.

"It's a success for Laurent Fabius, who really threw himself into it, and for Francois Hollande, who mobilised the heads of state and government."