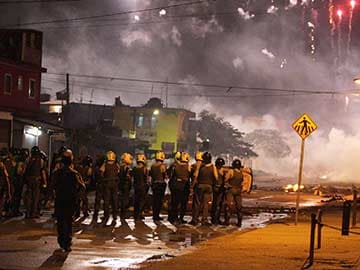 Riot police prepare to clash with demonstrators claiming for better housing in a neighborhood near the Guarulhos International Airport in Sao Paulo, Brazil on May 16, 2014.

Sao Paulo: Dozens of protesters clashed with police late Friday, throwing fireworks and torching at least two vehicles near Sao Paulo's airport, which has just opened a new international terminal ahead of the World Cup.

Police responded with stun grenades to disperse the estimated 50 protesters who demonstrated in the Sao Paulo suburb of Guarulhos to demand better living conditions, according to media reports.

"They looted fireworks and ignited them and threw them at police. There were no reports of injury but some vehicles were damaged," a police spokeswoman told AFP.

The protest occurred just 27 days ahead of the World Cup, with a substantial flow of international attendees slated to pass through the gates of the new Guarulhos airport terminal.

A series of protests have shaken Brazil ahead of the month-long tournament that will begin June 12.

Brazil faced a major test of its security preparations Thursday as 10,000 demonstrators upset at the cost of the World Cup took to the streets in Belo Horizonte, Brasilia, Manaus, Porto Alegre, Rio and Sao Paulo.

In business hub Sao Paulo, about 6,000 people staged several marches throughout the day, with demonstrations ending in vandalism and confrontations with police.

Meanwhile in the northeastern city of Recife, a partial strike by military police was lifted after youths took advantage of the opportunity to loot stores and go on a rampage.

Sports Minister Aldo Rebelo reassured reporters that demonstrations will decrease during the World Cup and the country will adopt a festive atmosphere.

Promoted
Listen to the latest songs, only on JioSaavn.com
About 600,000 foreign visitors are expected for the tournament, in addition to about three million Brazilians who will travel domestically for the matches.