The gunman's footage showed Mohemmed Daoud Nabi, a 71-year-old from war-torn Afghanistan, offering a welcome at the doors of the Al Noor mosque. He was shot and the killer moved inside. 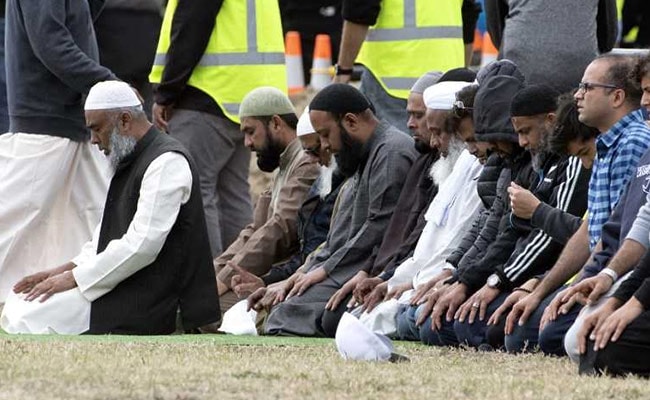 "Hello brother." The warm-hearted words an elderly Muslim reportedly used to greet a white supremacist gunman have become Christchurch's answer to his volley of hate.

Mohemmed Daoud Nabi, a 71-year-old from war-torn Afghanistan, was buried on Thursday. But his supposed final words echo across this broken New Zealand city.

The gunman's footage showed Nabi offering a welcome at the doors of the Al Noor mosque. He was shot and the killer moved inside.

Initial reports indicated Nabi's remark was "hello brother", a fraternal greeting that could not contrast more starkly with the bile spewed about "invaders" by alleged gunman Brenton Tarrant.

The words are indistinct but it is a message that has resonated widely, including for New Zealand Prime Minister Jacinda Ardern.

"His welcome tells us so much -- that he was a member of a faith that welcomed all its members, that showed openness, and care," Ardern said.

The phrase has since appeared across Christchurch and New Zealand -- scribbled on police cordons that flutter in the wind, Tweeted from around the world and written on placards held by mourners at his funeral.

"We Want To Live In Peace"

Kawthar Abulaban was praying in the women's section of the Al Noor mosque when the attack began.

The first shots she heard would have been the ones that felled Nabi.

She believes he has left a legacy, a powerful vocal rebuke to hatred and extremist ideologies.

"This message will tell all of the world what the Muslim people are, how we treat other people, how we care about them, how we want to live in peace together," the 54-year-old told AFP from the home she shares with her two daughters on the outskirts of Christchurch.

She was not in the least bit surprised the gunman was welcomed on arrival -- the Al Noor mosque regularly held open days. 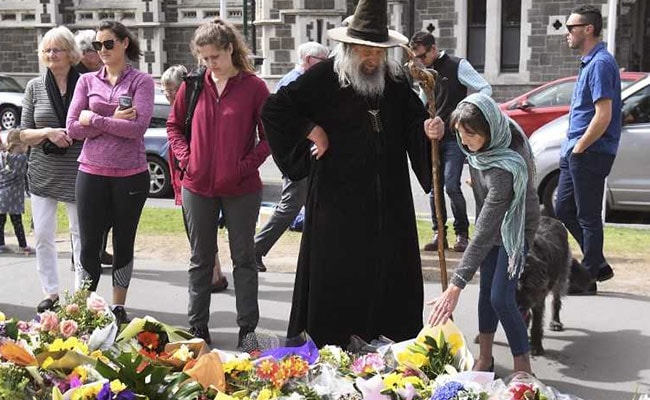 Ian Brackenbury Channell, known as the Wizard of New Zealand, before a memorial at the Botanic Gardens in Christchurch. (AFP)

During Christchurch's deadly earthquakes eight years ago, the mosque opened its doors to survivors and those without shelter.

Sara Mousa, who arrived in New Zealand from Egypt three years ago, was walking in the park opposite Al Nour with her eight-year-old son Malek, who sports a Kiwi accent.

"It was so kind of him, he had a lot of mercy and love, no hatred. Even if he is holding a gun towards him and wants to kill him, he is welcoming him," she said.

The phrase has been repeated thousands of times on social media, appearing in cartoons and on tributes left with the growing walls of flowers in Christchurch.

One note tied to a tree in the city read: "This greeting was made by a pure soul with a peaceful faith as a rifle was pointed at him... Let us remember his love and be like him."

Churches have offered to open their doors for any Muslims wanting to pray. On Wednesday evening a biker-pastor organised a show of solidarity with locals standing behind Muslims as they prayed in the park opposite Al Noor mosque.

"We are here because love is greater than hate, that's the theme. We are here tonight for our Muslim whanau," Derek Tait, the biker-pastor said, using a Maori term for an extended family.

One particularly poignant tribute can be seen outside All Soul's Church in the suburb of Merivale where 50 pairs of shoes spray-painted white are lined up. 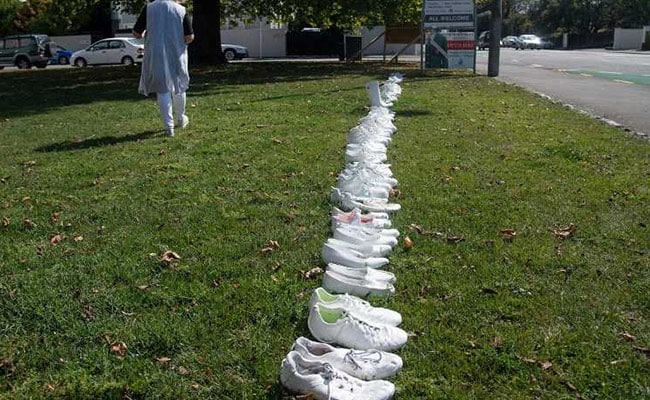 Fifty pairs of shoes lay outside the All Souls Church representing the 50 people gunned down at the two mosques. (AFP)

The tribute mimics a similar permanent memorial to the 189 people killed in the 2011 earthquake which contains a white tear for every person killed.

"I just thought of the chaos, tripping over shoes. There are all these people barefoot and bleeding on the street. There are people who will never fill those shoes," Vicar Megan Herles-Mooar, one of three women who came up with the idea, told AFP.

She described such tributes as "a visible sign on a sort of invisible grief" but warned New Zealand will need more than acts of solidarity in the immediate aftermath of these murders.

"We have to ask some really serious questions around racism and othering and how we welcome immigrants and let them know that they're not immigrants, they are part of our community," she said.

"My hope is that we have the courage to do that."

Back at her home Kawthar Abulaban says she has barely managed to sleep since Friday's attacks -- the trauma of that day coming back to her in waves of flashbacks.

But she takes comfort knowing the shooter has so far failed to inspire the division he hoped to sow.

"He is the loser," she says, after contrasting Tarrant with Nabi.

"He lost, not us. We lost friends, lots of friends from my community, but he didn't win."

Nabi's funeral on Thursday showed that community had only grown, his 100-plus mourners -- families and friends -- expanding to include a phalanx of bikers and locals inspired by his message.

(Except for the headline, this story has not been edited by NDTV staff and is published from a syndicated feed.)
Comments
new zealand attackChristchurchMosque attacks