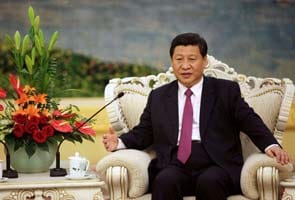 Beijing: Three years ago in Mexico, China's president-in-waiting, Xi Jinping, provided a rare glimpse of a future leader who was born into a revolutionary aristocracy and came of age in the tumult of Mao Zedong's Cultural Revolution.

Xi usually sports the dark suit and cautious public mask that is the uniform of China's Communist Party leadership. But in Mexico, he dropped his guard in a steely defence of his country against criticism from abroad.

"In the midst of international financial turmoil, China was still able to solve the problem of feeding its 1.3 billion people, and that was already our greatest contribution to humankind," he said in comments that soon drew applause from Chinese Internet users.

Xi's mask will be back in place on Thursday when he takes his place at the front of the stage in Beijing's cavernous Great Hall of the People at the opening of a key congress at which he will assume the mantle of party boss from President Hu Jintao.

Xi, 59, is the son of reformist former vice premier and parliament vice-chairman Xi Zhongxun, making him a "princeling", one of the privileged sons and daughters of China's incumbent, retired or late leaders.

He grew up among the party elite and then watched his father purged from power before the Cultural Revolution, when Xi himself spent years in the poverty-stricken countryside before scrambling to university and then power.

Considered a cautious reformer, having spent time in top positions in Fujian and Zhejiang provinces, both at the forefront of China's economic reforms, Xi has long been marked out as the likely successor to Hu.

Hu must retire from running the party at this congress and from the presidency in early 2013.

Married to a famous singer and briefly in charge of Shanghai, China's richest and most glamorous city, Xi has crafted a low-key, sometimes bluff political style. He has complained of officials' speeches and writings being clogged with party jargon and demanded more plain speaking.

In September, Xi unsettled Chinese people and the foreign business community alike when he vanished from public without explanation for about two weeks, prompting feverish rumours of serious illness and a troubled succession.

Sources said Xi hurt his back while swimming and that he had been obeying doctors' orders to get bed rest and undergo physiotherapy.

Xi went to work in the poor northwest Chinese countryside as a "sent-down youth" during the chaos of the 1966-76 Cultural Revolution, and became a rural commune official.

He studied chemical engineering at Tsinghua University in Beijing, an elite school where Hu also studied. Xi later gained a doctorate in Marxist theory from Tsinghua.

Xi shot to fame in the early 1980s as party boss of a rural county in Hebei province, which surrounds Beijing. He had rare access to then national party chief Hu Yaobang in the leadership compound, Zhongnanhai, west of the Forbidden City.

A native of the remote, inland province of Shaanxi, home of the terracotta warriors, Xi was promoted to governor of the southeastern province of Fujian in August 1999 after a string of provincial officials were caught up in a graft dragnet.

In March 2007, the tall and portly Xi secured the top job in China's commercial capital, Shanghai, when his predecessor, Chen Liangyu, was caught up in another huge corruption case. Xi held that post until October 2007 when he was promoted to the party's Standing Committee - the ruling inner-circle.

Xi is married to Peng Liyuan, a renowned singer who was once arguably more popular in China than her husband, until the party began ordering her to keep a low profile as her husband moved up the ranks.
© Thomson Reuters 2012
Comments
ChinaXi Jinping