China Should Be Prepared For Crisis Over US Stance On Taiwan: Report

The rise in tensions over Taiwan come at a sensitive time for US-China relations when the two countries are locked in negotiations to avoid a full-blown trade war. 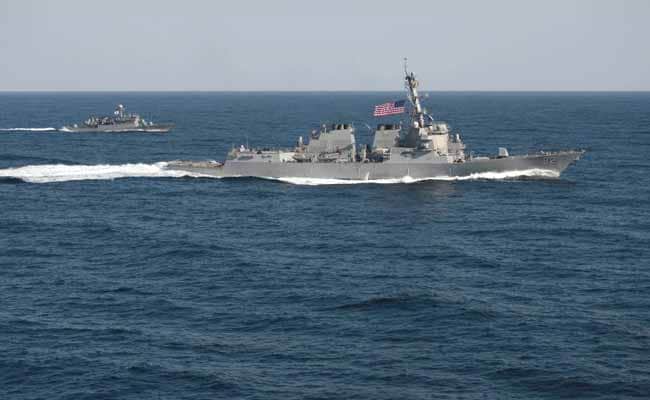 Shanghai: China should be prepared for crisis in the Taiwan Strait, the hawkish Global Times newspaper said in an editorial on Friday, amid rising tension between Beijing and Washington over the self-ruled island that China sees as a wayward province.

The United States has ramped up pressure on China in the disputed South China Sea, with reports of U.S. bombers flying over the region this week. Reuters reported Washington was considering sending a warship through the Taiwan Strait.

China and the United States - currently in heated talks over trade - have frequently sparred over questions of militarisation of the South China Sea, where China, Taiwan, Vietnam, Malaysia, Brunei and the Philippines all have competing claims.

"China and the U.S. are likely to face a new Taiwan Straits crisis sooner or later. China needs to make early preparation," the state-backed Chinese tabloid said. The newspaper does not reflect official policy.

"The Chinese mainland is not afraid of any crisis in the Taiwan Straits, even a showdown, so as to quash U.S. and Taiwan aggressiveness and safeguard national unity," it said.

The rise in tensions over Taiwan come at a sensitive time for U.S.-China relations. The two countries are locked in negotiations to avoid a full-blown trade war.

The comments reflect earlier statements by the newspaper, which said last month China must prepare to forcefully respond to any "extreme" U.S. interference in the South China Sea.

China has alarmed Taiwan by ramping up military exercises this year, including flying bombers and other military aircraft around the island and sending its aircraft carrier through the narrow Taiwan Strait that separates it from Taiwan.

Taiwan simulated repelling an invading force and used civilian-operated drones for the first time as part of annual military drills on the self-ruled island on Thursday.

China claims Taiwan as its sacred territory under its "one China" policy and Beijing has never renounced the use of force to bring what it sees as a wayward province under its control.

Promoted
Listen to the latest songs, only on JioSaavn.com
(Reporting by Adam Jourdan; Editing by Paul Tait)
© Thomson Reuters 2018