Mr Wong arrived in Berlin late on Monday evening, where he said he would "continue his battle for free elections". 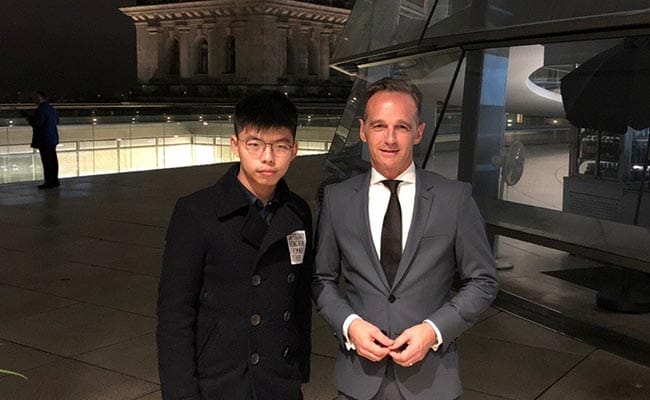 Mr Wong met Maas on Monday in Berlin at an event hosted by the German newspaper BILD.

After being held for around 24 hours at the Hong Kong airport on Sunday for allegedly breaching the terms of his bail, Mr Wong arrived in Berlin late on Monday evening, where he said he would "continue his battle for free elections".

The timing is especially awkward as German Chancellor Angela Merkel visited Beijing last week. Hong Kong has been gripped by weeks of protests, initially against a now-shelved extradition bill and now focused more on securing greater freedoms for Hong Kong.

Chinese Foreign Ministry spokeswoman Hua Chunying said China was "extremely dissatisfied and resolutely opposed" to German allowing Wong to visit and to allow him to meet the German foreign minister.

Hong Kong is an internal affair and no foreign government, organization or individual has a right to interfere, she added.

"Any plots to rely on foreigners to build oneself up or acts or words to split the country are doomed to failure."

Ms Hua said that during her trip last week, Merkel clearly said that she opposes violence and supports "one country, two systems".

Hong Kong returned to Beijing from British rule in 1997 under a "one country, two systems" formula that guarantees freedoms not enjoyed on the mainland.

"We can't help but ask, what is the purpose of the German side in allowing Joshua Wong to come to Germany at this time and to meet with minister Maas?"

China urges Germany to abide by its promises and avoid sending wrong messages to separatist Hong Kong forces, and urges Maas to abide by the basics of international law and act for the benefit of relations and not be a "damager" of the relationship, Ms Hua added.

Interference by foreign parliaments in Hong Kong's matters is deeply regrettable, the leader of the Chinese-ruled city said earlier on Tuesday, adding that an escalation of violence cannot solve social issues in the city.

Carrie Lam was speaking after another weekend of sometimes violent clashes in the former British colony, with police firing tear gas to disperse protesters in cat-and-mouse skirmishes, at times smashing windows and starting street fires.

Many Hong Kong residents fear Beijing is eroding the autonomy they had been promised. China denies accusations of meddling in the city.