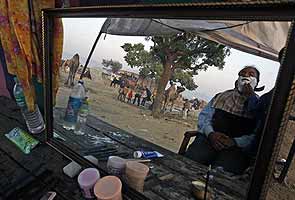 File pic: A man gets shave during the annual cattle fair in Pushkar, Rajasthan

New York: Procter & Gamble executives say it was striking the first time they witnessed a man shave while sitting barefoot on the floor in a tiny hut in India.

He had no electricity, no running water and no mirror.

The 20 US-based executives observed the man in 2008 during one of 300 visits they made to homes in rural India. The goal? To gain insights they could use to develop a new razor for India.

"That, for me, was a big 'a-ha,'" said Alberto Carvalho, vice president, global Gillette, a unit of P&G. "I had never seen people shaving like that."

The visits kicked off the 18 months it took to develop Gillette Guard, a low-cost razor designed for India and other emerging markets. Introduced three years ago, Guard quickly gained market share and today represents two out of every three razors sold in India. The story of how Guard came to be illustrates the balance companies must strike when creating products for emerging markets: It's not as simple as slapping a foreign label on an American product.

To successfully sell products overseas, particularly in developing markets, companies must tweak them so they're relevant to the people who live there. And often, that means rethinking everything from the product's design to its cost. More companies will have to consider this balancing act as they increasingly move into emerging markets such as India, China and Brazil to offset slower growth in developed regions such as the US.

For its part, P&G has doubled the percentage of its roughly $20 billion in annual revenue coming from emerging markets since 2000 to about 40 percent. Ali Dibadj, a Bernstein analyst who follows P&G, said the Guard razor, which has been used by more than 50 million men in India, serves as a roadmap for companies seeking to court emerging markets.
"It made P&G realize how much investment it really takes to be successful in India," he said. "That's the art of emerging markets."

India long has been an attractive country for US companies looking for growth. It has 1.24 billion people. And its economy is bustling: India's annual gross domestic product growth was 3.2 percent in 2012, according to the World Bank, compared with 2.2 percent in the US the same year.

Still, India's widespread poverty presents challenges for companies used to customers with more disposable income. India's per capita income is just about $124 a month, compared with $4,154 in the US, according to the World Bank.

Gillette has sold razors in India for over a decade. The company had 37.3 percent market share in 2007, selling its high end Mach3 razor, which costs about $2.75, and a stripped down Vector two-bladed razor on the lower end, which goes for about 72 cents.

But Gillette wanted more of the market. To do that, P&G executives would have to attract the nearly 500 million Indians who use double-edged razors, an old fashioned T-shaped razor that has no protective piece of plastic that goes between the blade and the skin when shaving. This razor, which makes skin cuts more likely, costs just a few pennies per blade.

Carvalho, who spearheaded Gillette's effort to grow market share in India, didn't want to rush into designing a product, though.

Gillette had stumbled once before with its early version of the Vector in 2002. The version of that razor had a plastic push bar that slid down to unclog the razor. The bar was added because Indian men have thicker hair and a higher hair density than their American counterparts. Adding to that, they often shave less frequently than American men, so they wind up shaving longer beards.

Gillette, which is based in Boston, wanted to test the product among Indian consumers before launching it, but instead of making the costly trip abroad, they had Indian students at nearby Massachusetts Institute of Technology test the razor. "They all came back and said 'Wow that's a big improvement,'" Carvalho recalls.

But when Gillette launched the razor in India, the reaction was different. Executives were baffled about why the razor flopped until they traveled to India and observed men using a cup of water to shave. All the MIT students had running water. Without that, the razor stayed clogged.

"That's another 'a-ha' moment," Carvalho said. "That taught us the importance that you really need to go where your consumers are, not just to talk to them, but observe and spend time with them to gather the key insight."

P&G acquired Gillette in 2005 and the next several years were spent integrating the companies. But in 2008, the focus on India returned when Carvalho decided to bring 20 people, ranging from engineers to developers, from Gillette's US headquarters to India for three weeks.

They spent 3,000 hours with more than 1,000 consumers at their homes, in stores and in small group discussions. They observed people's routines throughout the day, sometimes staying late into the evening. They also hosted small group discussions. "We asked them what their aspirations were and why they wanted to shave, and how often," Carvalho said.

They learned that families often live in huts without electricity and share a bathroom with other huts. So men shave sitting on their floors with a bowl of water, often without a mirror, in the dark morning hours. As a result, shaving could take up to half an hour, compared with the five to seven minutes it takes to shave in American households. And Indian men strain to not cut themselves.

The takeaway: In the US, razor makers spent decades on marketing centered on a close shave, adding blade after blade to achieve a smoother cheek. But men in India are more concerned about not cutting themselves.

"I worked in this category for 23 years and I never realized with those insights that's how they think about the product," said Eric Liu, Gillette's director of research and development, global shave care.

With that knowledge, the Gillette team started making a new razor for the Indian market. In nine months, P&G developed five prototypes.

The company declined to give specifics on each prototype for competitive reasons. But they tested things like handle designs, how well the blade cuts hair and how easy the razor is to rinse.

The resulting Guard razor has one blade, to put the emphasis on safety rather than closeness, compared with two to five blades found on US razors.

One insight from filming shavers was that Indians grip the razors in many different ways, so the handle is textured to allow for easy gripping. There's also a hole at the handle's base, to make it easier to hang up, and a small comb by the blade since Indians hair growth tends to be thicker.

Next, the company had to figure out how to produce the razor at the right price. "We had to say 'How do we do this at ruthless cost?'" Carvalho said.

P&G scrutinised the smallest details. It cut the number of components in the razor down to 4 compared with 25 needed for the Mach3, Gillette's three-blade razor. They even made the razor's handle hollow so it would be lighter and cheaper to make.

"I can remember talking about changes to this product that were worth a thousandth, or two thousandths of a cent," said Jim Keighley, the company's associate director for product engineering.

The result? The Guard costs about one third of what it costs to make the Vector, Gillette's low-price Indian razor before Guard. Gillette sells the Guard for 15 rupees, or 34 cents, and each razor blade is 5 rupees, or 12 cents.

Promoted
Listen to the latest songs, only on JioSaavn.com
The company's strategy seems to have worked. P&G says with 9 percent market share, Guard has grown share faster than any other P&G brand in India. And Gillette's market share for razors and blades in India has grown to 49.1 percent, according to Euromonitor. That's up from 37.3 in 2007.