Central America: Where Wearing the Wrong Sneakers Can be Fatal 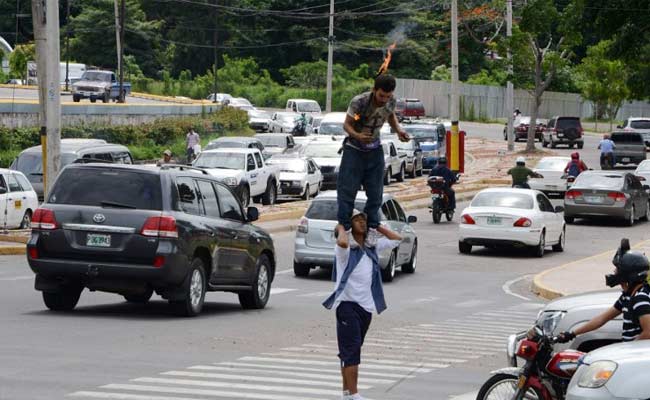 Jugglers perform in a street of Tegucigalpa. In the so called "north triangle" of Central America (Honduras, Guatemala and El Salvador) some 6.5 million young people face daily decisions for survival in a violent region without war. (AFP)

San Salvador: Wearing a particular brand of sneakers or a certain haircut can be a fatal style decision in Guatemala, El Salvador or Honduras - three Central American nations struggling with a vicious gang pandemic.

Looks that would be ordinary elsewhere have been appropriated by the criminal gangs as their signs on the streets, where armed turf battles have made these countries some of the deadliest places in the world, outside of actual war zones.

That means the 6.5 million youths aged 15-24 living in the so-called Northern Triangle formed by the three nations have to think twice about everyday apparel lest they be mistaken for enemy targets or usurpers by gang members, or even suspected criminals by the police.

"It's crazy. You can't wear this or that brand of sneakers because they are part of the style adopted by the gangs," said Mauricio Cornejo, 18, as he walked along a San Salvador street contested by two fearsome gangs, the Mara Salvatrucha (MS-13) and Barrio 18.

Footwear made by US company Nike, especially its popular Cortez model, and by German groups Adidas (its Superstar range) and Puma are the preferred gang shoes. Other clothing items also carry risk.

"You can't wear a baseball cap with the peak worn low, or behind, or on the side. Shirts can't be too big or too close to the body. And if someone walks like a gang banger, the police can arrest them for interrogation," explained Arnulfo, a 22-year-old resident of Colonia La Sosa, a western suburb of the Honduran capital Tegucigalpa.

Silvia Bonilla, a member of a charity called Mujer Legal who leads a gang-violence awareness program in schools and prisons, said teens and youths need to know exactly where they are at all times, "because otherwise they are risking their lives."

Climbing bloodshed
According to statistics from state forensic institutes, there were 15,802 murders in the three Central American countries last year, overwhelmingly linked to gang violence - and that toll looks likely like it will be even higher in 2015.

Between January and September this year, there were 4,281 murders in Guatemala and 4,942 in El Salvador. In the first six months of the year, there were 2,628 homicides recorded in Honduras.

In each of the countries, more than half the victims are youths aged under 25, wiped out by the "maras," as the gangs are called locally.

The climbing bloodshed, according to Carolina Orellana of an umbrella charity group called The Coalition for the Prevention of Violence, is a sign of "the failure of ultra-repressive policies" -- security crackdowns that have stirred fierce gang blowback.

Viviana Soto, a 29-year-old working in a youth support program with the Demos Foundation, said: "For young Guatemalans, everything is complicated because we live with no freedom of movement. It's impossible to go out into the street."

"We can't go to the (town) square or the football fields; the gangs can turn up at any time to fight. We spend all our downtime at home, playing video games if we have them," he said.

Recruited young
Children and teens are especially at risk. The gangs recruit or force people as young as eight years old to join, making them informers, couriers or extortion collectors in the belief they will be treated lightly or let go by the police if caught.

But even brief periods in detention centers can turn them into hardened criminals, said Danilo Parinello, a Guatemalan criminologist. Inside they are indoctrinated, often tattooed, and made gang members for life - though their lives are all too often cut short.

"The violence has a big impact on job opportunities" for youths, explained Daniela Trucco of the UN Economic Commission for Latin America and the Caribbean, and author of a book on the challenges confronted by young people in the region.

Carlos Navarro, who coordinates a rural program in Honduras aimed at giving pupils a safe outlet outside school, said: "The young people are our present. And to prevent them going towards violence, we have to build effective alternatives with the support of the international community."