It is still not clear what the man's motive was behind and how he smuggled the cake into the museum. 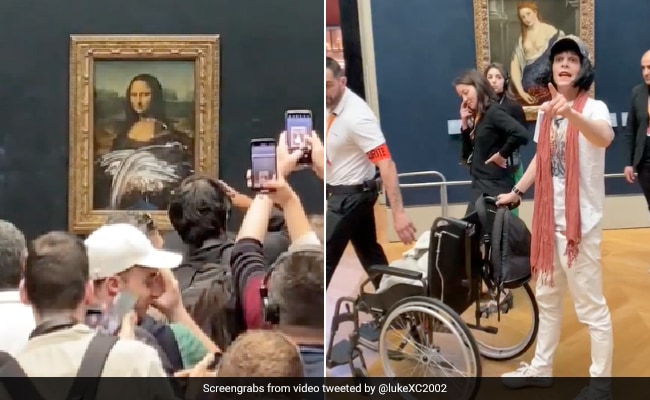 The Mona Lisa portrait was painted by Leonardo da Vinci in the 16th century.

Art fans at the Lourve Museum in Paris were left stunned after an “old woman” jumped out of her wheelchair to smear cake over the Mona Lisa painting. Images and videos of the famous painting stained with cake cream went viral on social media on Sunday.

Marca reported that a man disguised as an elderly woman in a wheelchair jumped up and threw cake on the iconic painting, shocking onlookers. He reportedly attempted to break through the bulletproof glass that protects Leonardo da Vinci's work in the Louvre Museum.

Can anybody translate what ole dude was saying as they where escorting him out?😂 pic.twitter.com/Uy2taZ4ZMm

According to eyewitnesses, the perpetrator was a man in a wheelchair who wore a wig. He suddenly stood up and approached the painting. At first, he tried to destroy the display case. When that didn't work, he threw the cake onto the canvas and spread it over the glass panel. He also sprinkled roses before he was knocked to the ground by security.

The video shows the cake smeared across the glass the Mona Lisa sits behind. It also shows the perpetrator addressing the visitors in French as he is taken by security. Citing a Spanish media outlet, Pledge Times reported that among other things, the man shouted: “some people are trying to destroy the earth, think of the earth!”

Eyewitnesses said that the man disguised himself as an old lady and rode through the museum in a wheelchair before committing the attack. It is still not clear what the man's motive was behind and how he smuggled the cake into the museum.

Meanwhile, it is to mention that this is not the first time the Mona Lisa has been targeted by vandals. According to Ladbible, in 1956, the lower part of the masterpiece was severely damaged when a vandal doused the painting with acid. Due to this incident, the Mona Lisa was kept behind bulletproof glass.