Caught On Camera: Attackers Stomped On Heads Of British Tourists In This Country 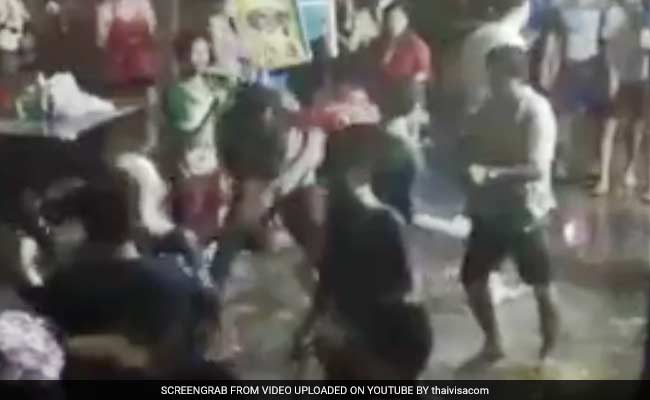 The attack marks the latest act of violence against tourists in the Southeast Asian country.

BANGKOK: An elderly British couple and their son were savagely attacked during a family vacation in Thailand in the latest blow to the country's image as a welcoming tourist paradise. Police said Thursday they have arrested three alleged attackers and are looking for one more.

A video of the attack, which was captured by overhead security cameras and posted this week on social media, has stirred shock and outrage over its brutality and the ages of the elder victims, a 65-year-old woman and 68-year-old man from Scotland. The attack marks the latest act of violence against tourists in the Southeast Asian country.

In the clip the family is seen walking down a crowded street in the beach town of Hua Hin on the evening of April 13, amid festivities for the Thai New Year.

(Content in this video could be disturbing for viewers.)

An altercation breaks out with a group of men on the street who punch all three in the face, kick their bodies and stomp on their faces in an attack that lasts about 2 minutes.

Police Col. Chaiyakorn Sriladecho said it started after "the son accidentally bumped into one of the Thai men."

The attack stops only when all three victims are seen lying apparently unconscious on the ground. As the Thai gang disappears, bystanders come to their aid.

"We have arrested three of the four suspects and have issued an arrest warrant for the other one who is still on the loose," he said.

"The men say they are sorry and that they wouldn't have done this if they weren't drunk," Chaiyakorn said.

The 43-year-old son and his father suffered head injuries requiring stitches, he said. The mother was more severely injured, suffering a buildup of fluid in the brain that was removed, he said. "The hospital is still holding her for observation for serious head and eye injuries."

In March, four French tourists were assaulted on the island of Koh Kut as they walked to dinner. Among them were a mother and daughter who were both raped.

Two British backpackers were murdered on the island of Koh Tao in 2014. Autopsies showed the couple, a young man and woman, had been severely beaten and the woman raped. Two Myanmar migrants were convicted of the crime based on DNA evidence that rights groups say was questionable.
Comments
British coupleFamily Getting Attacked In ThailandBritish Tourists abused