Carles Puigdemont: Fighting For The Dream Of Catalan Independence

A former journalist who rose to become mayor of the city of Girona and a lawmaker in the regional parliament, Carles Puigdemont was appointed Catalan president with a mandate to pursue independence in a region deeply divided on the issue. 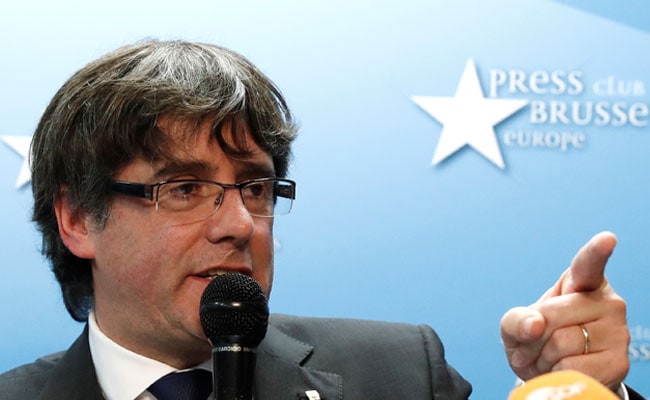 For Puigdemont, independence from Spain has been a dream since childhood (File)

Barcelona, Spain: Catalonia's former president Carles Puigdemont, who was arrested Sunday in Germany on a European warrant, embodies for his supporters the dream of turning the region into an independent state.

Virtually unknown in Spain and even Catalonia before he became regional president in January 2016, the 55-year-old former journalist with a shaggy brown mop of hair has become an international figure for his failed attempt to break from Spain in October.

In self-exile in Belgium ever since, he had hoped he would make a comeback after leading Catalonia's separatist bloc to a win in December polls, even if he was wanted back home for his role in the independence drive.

But after weeks of tough negotiations between his supporters and other separatist leaders who thought his reappointment was fraught with difficulty, he lost the battle and stepped aside on March 1.

Speaking solemnly in front of Catalan and EU flags via a video posted on social media, he said he was not giving up and would continue to fight for independence, even from abroad.

For Puigdemont, independence from Spain has been a dream since childhood.

A visionary to some and an opportunistic populist to others, he speaks Spanish, Catalan, French, English and Romanian -- his wife Marcela Topor comes from Romania.

A former journalist who rose to become mayor of the city of Girona and a lawmaker in the regional parliament, he was appointed Catalan president with a mandate to pursue independence in a region deeply divided on the issue.

On October 1, this came to a head when an independence referendum was held despite a court ban, sparking a violent police crackdown.

The Spanish government moved in immediately, stripping Catalonia of its prized autonomy, sacking its regional government, dissolving its parliament and calling snap elections on December 21.

Puigdemont left for Belgium and was charged shortly after with rebellion, sedition and misuse of public funds for his role in the secession attempt.

Defying the odds, he ran from afar in December polls and led the separatist camp to victory.

But for him, that victory was short-lived.

Faced with the difficulty of appointing a man in exile and wanted by Spanish authorities, the Catalan parliament's speaker -- also a separatist -- postponed a key assembly vote to reappoint him as president in January.

In these messages that were accidentally caught on camera, he said it was over for him and that he had been "sacrificed" by his peers.

Puigdemont was born in Amer, a small mountain village in Catalonia of 2,200 people, on December 29, 1962, the second of eight siblings.

The son and grandson of bakers, he was just nine when he was sent to boarding school and "learnt to be a fighter", wrote his friend Carles Porta in a biography of Puigdemont.

"He has this quality (or this flaw): he's stubborn," Porta wrote.

Puigdemont was 13 when Spain's dictator Francisco Franco died in 1975.

Hugely attached to the Catalan language and passionate about history, the teenager would forever remember Franco's severe repression of the region.

In 1980, he joined Convergencia Democratica de Catalunya, the conservative and nationalist party which became the Catalan European Democratic Party in 2016.

Hired in 1982 by the nationalist newspaper El Punt Avui, he rose up through the ranks and became editor, combining journalism with activism.

At the time, pro-independence Catalans were still a minority.

Promoted
Listen to the latest songs, only on JioSaavn.com
In the following years, he sought to widen support for independence, always by peaceful means, inspired by India's icon, Mahatma Gandhi.

Puigdemont's detractors accuse him of ignoring Catalans who oppose independence while Spain's ruling conservative Popular Party has in recent months portrayed him as a "political corpse".