A car drove into pedestrians in New York City's Times Square on Thursday. The incident did not appear to be an act of terrorism, police said. 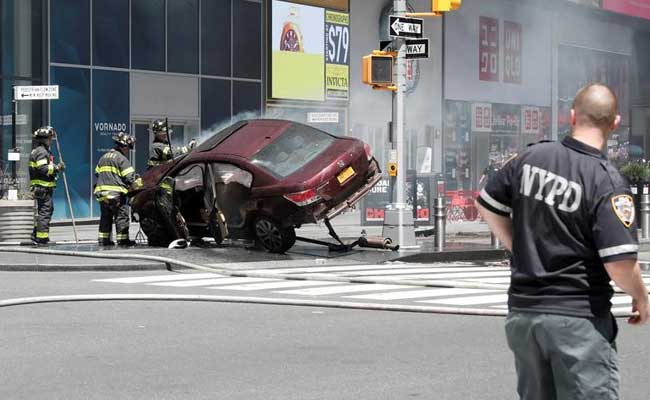 A speeding car ran into pedestrians in New York's Times Square on Thursday.

New York: A speeding car plowed into pedestrians on a sidewalk in New York City's busy Times Square on Thursday, killing one person and injuring 22, and authorities said there was no indication it was an act of terrorism.

Witnesses said the motorist was driving against traffic before his burgundy Honda sedan mounted the sidewalk and struck pedestrians. The car hit a pole and came to rest at 45th Street and Broadway before police took the driver away.

One woman was covered with a bloodstained blanket following the collision, which occurred close to noon local time at the Midtown Manhattan tourist venue, a Reuters witness said. Shoes were scattered at the scene.

New York Mayor Bill de Blasio told reporters there was no indication it was an act of terrorism and that the driver had two previous arrests for drunk driving. Police identified the motorist as Richard Rojas, 26, of New York.

Hundreds of thousands of people, many of them tourists from around the world, pass daily through the bustling commercial area, the heart of the Broadway theatre district. 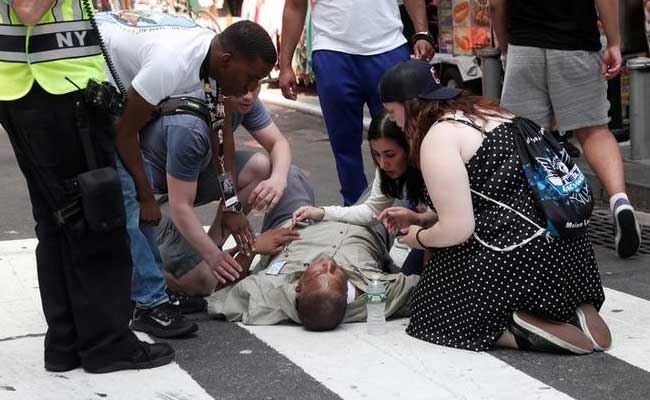 Police heavily patrol the area. Many sidewalks are lined with barricades and planters for fear of vehicle attacks on pedestrians of a sort seen in recent months in Britain, France, Germany and Sweden.

"People were being hit and rolling off the car," said Josh Duboff, an employee at the adjacent Thomson Reuters headquarters who jumped out of the way to avoid being struck.

Television footage showed police officers restraining a man in a dark T-shirt and placing him in a police car.

"One male in custody in the #TimesSquare vehicle collision," the NYPD said on Twitter. "It is believed to be an isolated incident, it remains under investigation." 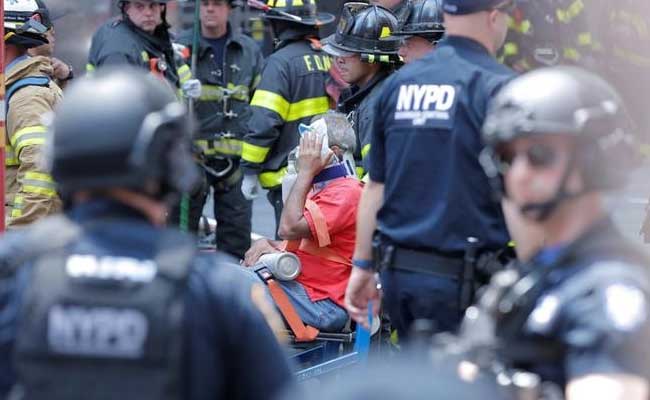 Times Square, New York: A red Honda sedan went against traffic and onto the sidewalk. (Reuters)

The crash occurred near the headquarters of the Reuters news agency, 3 Times Square. Building foreman Rodney Muir said he heard what sounded like a big bang and crunching metal. He said he looked out and saw what appeared to be a body lying on the street in front of the building.

Cheryl Howard and her daughter were out shopping when the car sped down the sidewalk. "I'm so freaked out!" the daughter said. "They mowed everyone down."

Howard had blood dripping down her right arm and a swollen bruise above her left eye. One injured woman nearby had a large open wound on her leg.

Initial reports of the incident revived memories of July last year when a man driving a truck killed at least 84 people, 10 of them children, and injured 202 in the French city of Nice. Islamic State claimed responsibility.

On March 22, five people were killed in London and about 40 injured after a car hit pedestrians and a suspected Islamist-inspired attacker stabbed a policeman near Britain's parliament.
© Thomson Reuters 2017
Comments
New YorkTimes SquareCar Rams Pedestrians