On Monday, the Canadian Prime Minister expressed the country's grief while pledging "concrete actions" in support of indigenous communities left traumatized by the news. 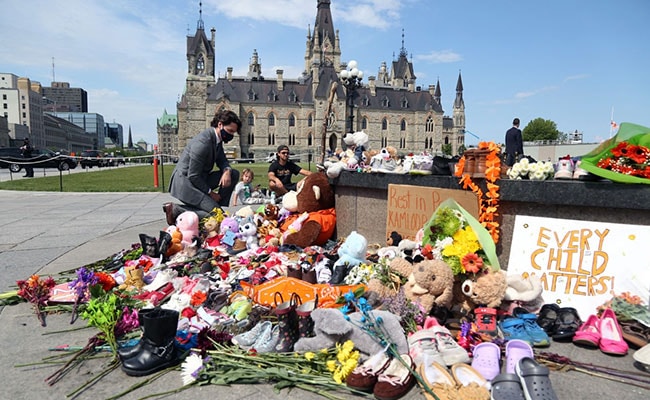 Justin Trudeau knelt before the heaps of children's shoes, toys left at the Centennial Flame in Ottawa

Canadian Prime Minister Justin Trudeau on Tuesday laid flowers at a makeshift memorial in front of parliament for 215 indigenous students whose remains were discovered last week at a former boarding school.

The grim find came last week at the Kamloops Indian Residential School, the largest of a network of boarding schools set up in the late 19th century to forcibly assimilate the country's indigenous peoples.

Trudeau observed several minutes of silence and knelt before the heaps of children's shoes and toys left at the Centennial Flame in Ottawa, before speaking briefly with an indigenous passerby.

Among the tributes at the memorial were messages of condolences, and one that read: "Every child matters."

Marking the start of National Indigenous History Month, Trudeau later tweeted: "This is a painful reminder of what took place at residential schools and the impacts still felt today. We cannot hide from this."

This is a painful reminder of what took place at residential schools and the impacts still felt today. We cannot hide from this. Residential schools were a reality - a tragedy that existed in our country - and we have to own up to it.

"Residential schools were a reality -- a tragedy that existed in our country -- and we have to own up to it," he said.

"We all have a role to play in dismantling systemic inequalities and discrimination -- it starts with acknowledging the truth about these past wrongs... and honoring the heritage, cultures, and traditions of First Nations, Inuit, and Metis peoples."

Memorials to honour the 215 children who were taken from their homes and never made it back are taking shape across Canada. We will never forget them - our thoughts continue to be with Tk'emlúps te Secwépemc First Nation and all Indigenous communities during this difficult time. pic.twitter.com/pAT6Pa0q5N

A take-note debate was to be held in parliament later Tuesday, allowing the government to solicit lawmakers' views on future indigenous policies.

The Tk'emlups te Secwepemc tribe in the western province of British Columbia announced last week it had used ground-penetrating radar to confirm the remains of the 215 students who attended the school near the city of Kamloops.

It was operated by the Catholic church on behalf of the Canadian government from 1890 to 1969, before Ottawa took over its administration and closed it a decade later.

On Monday, Trudeau expressed Canada's grief while pledging "concrete actions" in support of indigenous communities left traumatized by the news.

Some 150,000 Indian, Inuit and Metis youngsters in total were forcibly enrolled in the boarding schools, where students were physically and sexually abused by headmasters and teachers who stripped them of their culture and language.

At least 4,100 died, according to a truth and reconciliation commission, which estimated the actual toll was much higher.