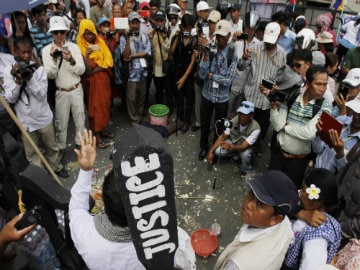 An activist of Cambodian National Rescue Party Meach Sovannara, center, gives a speech as he is surrounded by local journalists at a blocked main street near the Phnom Penh Municipality Court

But in a surprise move, the court on Friday gave the 23 defendants suspended sentences of one to 4 1/2 years in prison, and granted them freedom.

The 23 had been in prison since being arrested after the January protests.

Authorities cracked down on the January protests that were called to demand a higher minimum wage for garment factory workers, leaving at least four people dead. The crackdown drew criticism from human rights groups and the opposition.

Promoted
Listen to the latest songs, only on JioSaavn.com
Rights activists have long questioned the fairness of Cambodia's judicial system, which they say is tainted by politics and allows impunity for the rich and well-connected.