A lightning strike late last week sparked southeast Victoria's most severe at Bunyip State Park, which has burnt more than 6,000 hectares so far. 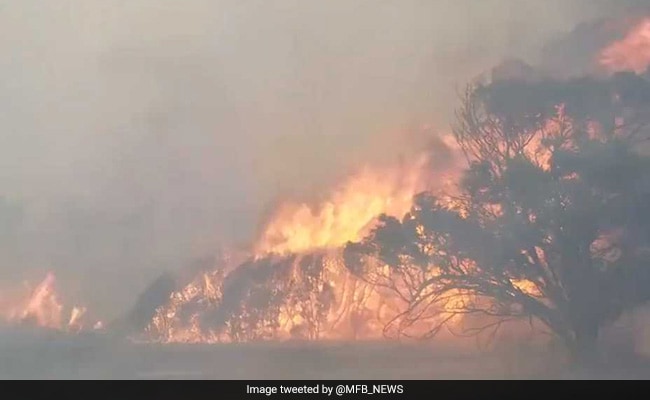 At least nine structures, including homes, have so far been damaged in the infernos.

Melbourne:
Homes have gone up in flames and skies turned blood red as nearly 1,000 firefighters battle dozens of out-of-control blazes in southern Australia in the wake of the nation's warmest summer on record.
A days-long heatwave sent temperatures soaring towards 40 degrees Celsius (104 degrees Fahrenheit) over the weekend, with bushfires raging across Victoria state forcing thousands of people to flee their homes.
A lightning strike late last week sparked southeast Victoria's most severe at Bunyip State Park, which has burnt more than 6,000 hectares (14,800 acres) so far.
Aerial footage of the destruction showed tall trees engulfed by bright red flames and the smouldering, blackened wreckage of buildings.
At least nine structures, including homes, have so far been damaged in the infernos, officials said.
A local winemaker spoke of his heartache as he watched his vineyard destroyed by a raging fire on television.
"I saw our wine cellar door, restaurant and the house next to our Airbnb cottage explode on TV. That's how we found out," Andrew Clarke, who fled his home on Saturday with his family, told The Age newspaper.
"We've lost everything. We've lost our livelihood. I planted that winery myself and put the first vines in back in 1979."
Victoria's emergency management commissioner Andrew Crisp said the crisis was not over, even as cooler conditions came to the aid of exhausted firefighters on Monday.
"We're not out of the woods yet," he said.
Australia suffered its hottest summer on record from December through February, while forecasts show the southern autumn -- which formally started on Friday -- will continue to be drier and warmer than average.
"The heat we saw this summer was unprecedented," weather bureau climatologist Lynette Bettio said Friday.
"While the final numbers are yet to be analysed, we know it will be the warmest on record for Australia as a whole, and many individual locations will have broken summer heat records as well."