Some British voters see US President Donald Trump as crude, volatile and opposed to their values on issues ranging from global warming to his treatment of women. 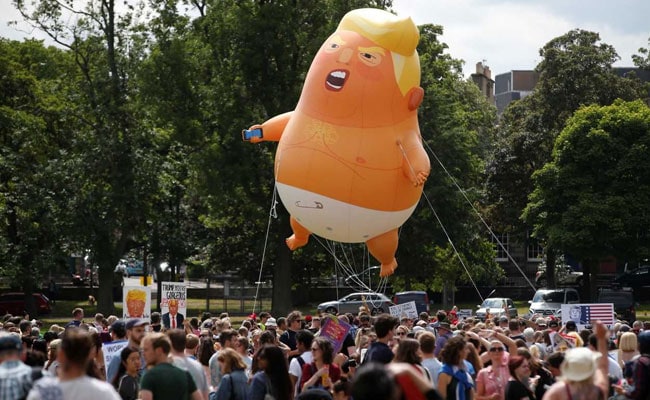 British protesters inflated a blimp depicting Donald Trump as a snarling, nappy-wearing orange baby on Wednesday, a trial run ahead of a planned flight during the US president's state visit to Britain next month.

At the invitation of Queen Elizabeth, President Trump and First Lady Melania Trump are due in Britain on June 3-5 for a state visit - a pomp-laden affair involving a carriage trip through London and a banquet at Buckingham Palace.

Britain's so-called special relationship with the United States is one of the enduring alliances of the past century, but some British voters see Trump as crude, volatile and opposed to their values on issues ranging from global warming to his treatment of women.

The blimp greeted Trump when he visited Britain in 2018, in what he described as an attempt to make him feel unwelcome.

The team behind the giant inflatable said they would let it fly again if a crowdfunding campaign can raise 30,000 pounds for groups backing causes from climate action to women's rights.

In a park in central London, protesters - who cast themselves as "Trump babysitters" - inflated the six-metre (20 foot) tall balloon.

"Why pick on Trump? He is the most powerful bully in the world," said Max Wakefield, one of the self-appointed "Trump babysitters".

"His power is built on division and about trashing the rights of some of the most vulnerable communities. So for us particularly as people here in the UK, which has a close relationship with the US, he is absolutely public enemy number one."

London's mayor Sadiq Khan gave permission for to the blimp to fly next to the Palace of Westminster in central London during Trump's previous visit, provoking anger from the US president's supporters who said it was an insult to the leader of Britain's closest ally.

While the British monarch makes the formal invitation for a state visit, the visit was offered by Prime Minister Theresa May when she became the first foreign leader to visit him after his inauguration in January 2017.

During his trip last year, Trump shocked Britain's political establishment by giving a withering assessment of May's Brexit strategy. He said she had failed to follow his advice, such as suing the EU, but later said May was doing a fantastic job.

But Trump is only the third US president to be accorded the honour of a state visit, after George W. Bush in 2003 and Barack Obama in 2011.

Last year, as hundreds of thousands protested across Britain, Trump was feted with a lavish dinner at Blenheim Palace, the birthplace of British World War Two leader Winston Churchill. He and Melania also had tea with the queen at Windsor Castle.

(Except for the headline, this story has not been edited by NDTV staff and is published from a syndicated feed.)
Comments
Donald Trump UK TripUK US relationTrump protest in Britain