Luiz Inacio Lula tried to get his sentence delayed in a marathon appeal at the Supreme Court in Brasilia on Wednesday. 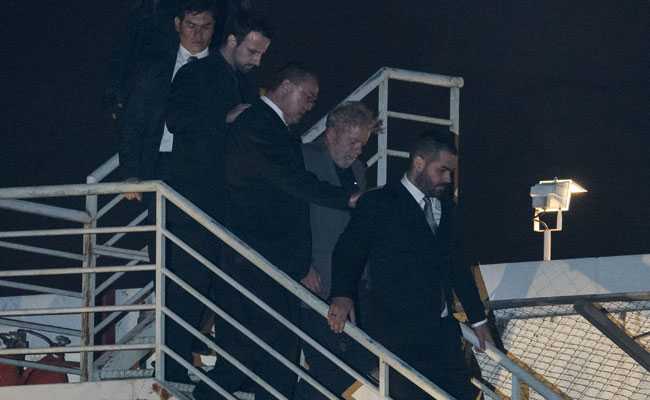 Curitiba, Brazil: Brazil's ex-president and leftist icon Luiz Inacio Lula da Silva flew in Saturday to the prison in Curitiba where he is due to serve his 12-year sentence for corruption, following days of drama that marked the downfall of once one of the world's most popular politicians.

The 72-year-old, former two-term president arrived by police helicopter on the roof of federal police headquarters in Curitiba, the southern city where Brazil's historic anti-graft "Car Wash" investigation is based.

As the helicopter landed, demonstrators outside let off volleys of fireworks, while riot police fired tear gas, filling the air with explosions and smoke. Eight people were lightly injured, including one hit by a rubber bullet, the fire department said.

It was a fittingly chaotic end to four days of intense tension as Brazil wondered whether the Workers' Party founder would finally be put behind bars.

He was found guilty last year of taking a luxury apartment as a bribe from a construction company and is the "Car Wash" probe's biggest scalp -- though Lula says the conviction was rigged.

Lula, who despite the scandal leads easily in polls ahead of October presidential elections, tried to get his sentence delayed in a marathon appeal at the Supreme Court in Brasilia on Wednesday.

When that was turned down, he engaged in a standoff with authorities in his hometown Sao Bernardo do Campo, outside Sao Paulo.

Surrounded by thousands of supporters at the metalworkers' union building in the suburb, he brazenly ignored an order to turn himself in by Friday.

On Saturday, he agreed to be taken into custody, only to find himself blockaded by his own supporters, with a crowd mobbing his car, shouting "Don't surrender, stay here Lula!" 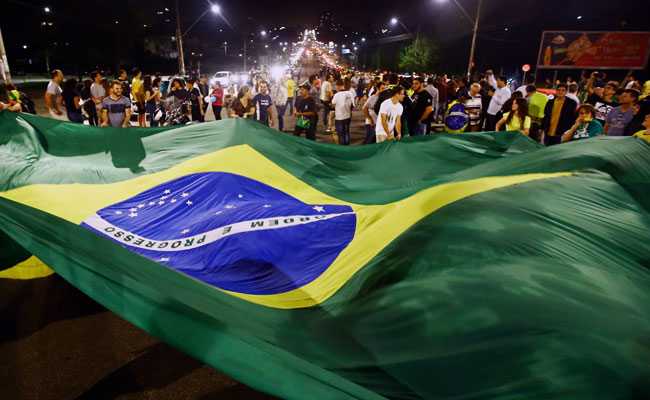 After his arrest, cheering broke out in parts of Brasilia, Rio de Janeiro and Sao Paulo (AFP)

At last, surrounded by bodyguards, Lula pushed through the seething throng of supporters on foot late Saturday, then got into a police vehicle and was taken to Sao Paulo airport for the flight to Curitiba.

A jail cell with extremely good conditions by the standards of Brazil's often violent, desperately overcrowded prisons -- including a hot private shower and toilet -- awaited him.

After his arrest, fireworks and cheering broke out in parts of Brasilia, Rio de Janeiro, Sao Paulo and other cities among those who long considered Lula responsible for the tide of graft sweeping over Brazilian politics.

But supporters cried openly at the exit of a man they remember for removing tens of millions of people from poverty and for connecting with voters in a way few, if any, other modern Brazilian politicians have managed.

An outsized figure in recent Brazilian history and revered around the world among leftists, Lula managed to cross political divides while president and oversaw a booming economy.

With him almost certainly knocked out of the presidential election, the race is likely to be thrown wide open. In polls, Lula currently scores more than double his nearest rivals.

The next potentially explosive legal development could come as early as Wednesday, when local media report that the Supreme Court may revisit the current law on incarceration during appeals.

Today, anyone convicted and losing a first appeal -- which is Lula's case -- has to conduct any further appeals in prison. But there is pressure to change that so that higher court appeals could be pursued in liberty, which would mean freedom for Lula.

In an emotional hourlong speech before his arrest in Sao Bernardo do Campo, Lula called himself "an outraged citizen" over the graft conviction.

He said that Brazil's top anti-corruption judge, Sergio Moro, "lied" about him being given the apartment by a big construction firm as a kickback.

"I am the only human being to be put on trial for an apartment that does not belong to me," he said.

Lula accused the judiciary and Brazil's most powerful media conglomerate of assisting a right-wing coup with the ultimate aim of preventing him from competing in the race.

"They don't want me to take part," he said. "Their obsession is to get a photo of Lula as a prisoner."

But, crucially, Lula said he would drop his dramatic show of resistance and comply with the arrest warrant.

After the speech, Lula was lifted onto the shoulders of supporters who chanted, "I am Lula."

(This story has not been edited by NDTV staff and is auto-generated from a syndicated feed.)
Comments
Luiz InacioBrazillian politics graftLuiz Inacio arrest