Boy With Cerebral Palsy Made To Lie In Muddy Creek, Used As Human Bridge

Brett Corbett, a high school freshman with cerebral palsy,lies down on his stomach, keeping his palms flat in the mud to steady himself as the current rushes past him. 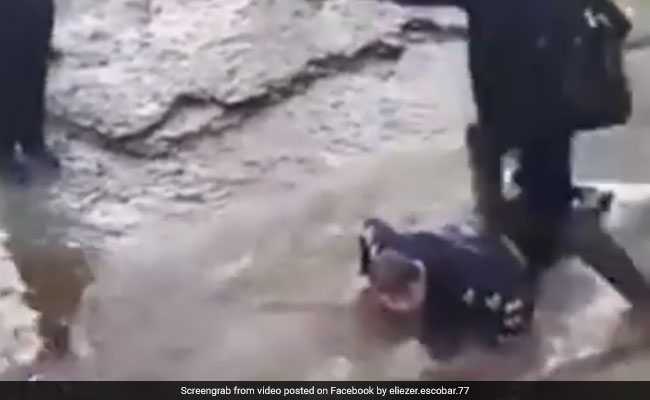 The video has spread across Canada and the world, evoking shock and calls to stand up against bullying.

At first, 14-year-old Brett Corbett told his mom he was sent to the principal's office sopping wet because the kids dared him to swim in the creek behind the school, in Glace Bay, Nova Scotia.

But then the videos emerged and, with them, an appalling story of bullying.

In one video displayed with this article, Corbett, a high school freshman with cerebral palsy, is seen standing in the middle of shallow, murky water while about 20 kids stare down at him from the top of a small hill. He lies down on his stomach, keeping his palms flat in the mud to steady himself as the current rushes past him.

And then, a moment later, a girl leaps from the bank, steps on Corbett's back as if it were a springboard, and launches herself to the other side - turning Corbett into a human bridge.

In another video, the teenagers are laughing hysterically. They yell at Corbett to get back in the water after he stands up. He doesn't want to.

She has not slept well since this happened last Wednesday. One video has spread across Canada and much of the world, evoking shock and calls to stand up more strongly against bullying. A local boxer organized a "Stand for Brett Corbett" rally outside Glace Bay High School to "show Brett he is never alone." Numerous messages of support have poured in.

But what has amazed McEachern most, she told The Washington Post, is her son's forgiveness. He didn't tell her the truth about what happened to him at first because he said he didn't want the other kids to get in trouble, she said. When she asked him whether he had been walked on after she watched the videos, he told her, "It's OK, I was already wet."

"It's just breaking my heart. This is his mindset," she said. "Children with disabilities have the most amazing gifts in the world. They don't see bad in anyone. They see so much good in everybody."

McEachern didn't find out what really happened to Corbett until family friend Brandon Jolie saw one of the videos circulating on Snapchat and Instagram. Jolie took his own video of the video and shared it with McEachern's older son - and on Facebook.

"Never in my LIFE have I ever been more disgusted," Jolie wrote. "Everyone who knows this boy knows he has a disability. How fricken hard is it to show some compassion??"

The responses to Jolie's post poured in: "How insulting for this young man. A total lack of respect for those with a disability," one said.

"They should be ashamed of themselves," said another.

"This is one of the most disgusting things I have ever seen," another woman said.

McEachern said some of the students involved were suspended for a single day - a response she found terribly inadequate.

She wasn't the only one. About 20 students walked out of classes Friday to protest what they described as the school's failure to take a firmer stand, the Cape Breton Post reported.

"Honestly, it's sickening," a 17-year-old junior told the paper. "It's a little upsetting to see nothing done about it."

School administrators could not immediately be reached for comment by The Post. Michelle MacLeod, a spokeswoman for the Cape Breton-Victoria Regional Centre for Education, told the Cape Breton Post that the administration was taking the incident seriously and that it found the behavior "unacceptable and very disappointing." Police are investigating the incident, MacLeod said, but she would not confirm or deny whether the students had been suspended, citing privacy reasons.

Since the video went viral, some of the students seen have apologized. The father of one apologized on his son's behalf at a public meeting and read from a letter in which the boy described his actions as "the worst decision of my life," CTV News reported.

Two girls and their parents came to Corbett's house to apologize to him and his mother. They each read aloud from their letters. The parents all cried. The girls cried. So did Corbett.

"I shouldn't have told you to go [into the water]. I should have helped you up instead of breaking you down," one girl began.

"You are way stronger than me for being so forgiving so fast," she continued, "and I'm really sorry for what I have done. I know better. This is not who I am as a person. I truly care. I made a really bad choice and I will live with that for the rest of my life. I want with all my heart to make this better, and I can promise I will never let this happen to anyone again."

Reading from her letter, the girl said she thought Corbett was an "awesome" and "interesting" person, but perhaps many of the kids at school didn't know that about him. She wanted to get to know him and asked whether they could be friends, "if you're up for it."

Corbett said they could, and soon they were headed upstairs to play Xbox, McEachern said.

"They said, 'I shouldn't have done this to you,' but he said, 'No, I'm glad,'" McEachern remembered. "He said he was glad it happened to him because maybe his story can make a difference."