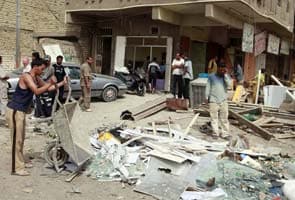 Ramadi: A series of bombs near a bakery, at a funeral, inside a senior police officer's car and at a football stadium killed at least 22 people across Iraq on Friday, police and medics said.

The violence is part of a trend of increasing militant attacks since the start of the year, which claimed more than 1,000 lives in May alone, making it the deadliest month since the sectarian bloodletting of 2006-07.

Twin blasts at a neighbourhood football stadium killed five players in Madaen, about 30 km (20 miles) southeast of Baghdad, and a roadside bomb near a bakery shop in the west of the capital left three people dead, police said.

A senior Iraqi police officer was killed when a bomb exploded inside his car and a second blast came five minutes later as police and bystanders gathered near the wreckage of the vehicle in the city of Ramadi in Anbar province.

Ten people died in those blasts.

"We were on duty at a nearby checkpoint when the car exploded. We ran to work out what was going on, but before we reached the car it exploded again," said a policeman at the scene. "Many civilians and policemen were killed."

A suicide bomber attacked a funeral in the mainly Shi'ite city of Dujail, killing at least four others, police and medics said.

Concerns that Iraq may lapse back into full-scale sectarian conflict have mounted in recent months amid tensions fuelled by the civil war in neighbouring Syria, where mainly Sunni rebels are fighting to overthrow a leader backed by Shi'ite Iran.

Sunni insurgents often target members of the security forces, heads of tribes and officials they see as supporters of the Shi'ite-led government, as well as Shi'ites.

At the height of Iraq's insurgency in 2006-07, Anbar was in the grip of al Qaeda's local affiliate, the Islamic State of Iraq, which has been regaining strength in recent months.

Promoted
Listen to the latest songs, only on JioSaavn.com
The attacks followed bomb blasts in coffee shops and other targets that killed at least 22 on Thursday.