Behind collapse, an industry reliant on flimsy oversight 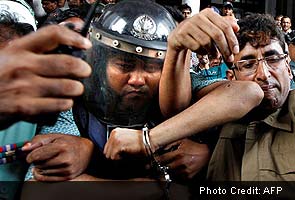 And perhaps no one wielded power more brazenly than Sohel Rana. He traveled by motorcycle, as untouchable as a mafia don, trailed by his own biker gang. Local officials and Bangladeshi media say he was involved in illegal drugs and guns, but he also had a building, Rana Plaza, that housed five factories.

Now Rana, 35, is under arrest, the most reviled man in Bangladesh after the horrific collapse of Rana Plaza last week left nearly 400 people dead, with many others still missing. Tuesday, a top Bangladeshi court seized his assets as the public bayed for his execution, especially as it appeared that the tragedy could have been averted if the frantic warnings of an engineer who examined the building the day before had been heeded.

But if Rana has been vilified, he is partly a creation of the garment era in Bangladesh, during which global businesses have arrived in search of cheap labor to keep profits high and costs low. Directly or indirectly, international brands are sometimes interlinked with men like Rana and are placed at risk by them.

Global apparel companies often depict their international supply chains as tightly scrutinized systems to ensure that clothing sold to U.S. buyers is produced in safe, monitored factories. Yet their inspectors usually check safety factors and working conditions, but not the soundness of the buildings themselves, and the companies often have little control over the subcontractors who do much of the work.

Criminality and politics have long intersected in Bangladesh, especially at the local level. But the garment industry has introduced what had mostly been the missing element: money. Savar land values soared as factories hurriedly opened to meet Western demand.

To build Rana Plaza, Rana and his father bullied adjacent landowners, the landowners themselves say, and took their property by force. His political allies gave him a construction permit, despite his dubious claims of title to the land, and a second permit later to add upper floors that might have destabilized the building.

Rana existed largely above scrutiny. Many local people say his political clout was such that not even the police dared to confront him. Television stations reported the cracks in the building the night before it collapsed, but no local authority prevented Rana from opening the building the next morning.

"Money is his power," said Ashraf Uddin Khan, a former Savar mayor, who accused Rana of being deeply involved in the drug trade. "Illegal money."

Before Rana Plaza collapsed, Bangladesh was already in turmoil as opposition political parties staged nationwide strikes, known as hartals, that paralyzed the country and placed huge pressure on factory owners to meet deadlines. Weeks earlier, the Bangladesh Garment Manufacturers and Exporters Association warned that the hartals had cost Bangladesh as much as $500 million in business.

Hartals were part of Rana's resume. He held what appeared to be an innocuous position as secretary of the local student wing for the Awami League, the country's majority political party. But that position translated into influence and helped him mobilize people. He developed a following that local people say he used as political muscle, sometimes to enforce strikes, sometimes to defy them.

"He had a criminal gang," said Mohammed Khorshed Alam, a Savar councilman and a member of the opposition Bangladesh Nationalist Party. He said Rana and his men carried weapons and were part of a network involved in the local drug trade.

Politics are rough in Savar. Alam walks through the city with an entourage of eight men, including a bodyguard with a sawed-off shotgun. Local officials say drug sales are widespread, although the city's police chief says he has stamped out the problem. One of the busiest drug dens, he said, used to exist behind Rana Plaza.

Land helped create Rana's power. His father had been a peasant who sold his plot in a village and bought a small parcel in Savar. As prices began to rise, the father sold a portion of that land and used his profits to start a small factory making mustard oil. He also became involved in politics with the Bangladesh Nationalist Party, then in power, and slowly grew richer.

By 2000, land prices were rising and Rana was helping his father. They could see other hurriedly constructed buildings rising in Savar, and they decided to build Rana Plaza - except they did not have clear title to all the land.

Rabindranath Sarkar, who had bought land in partnership with Rana's father, said the family sent thugs to seize part of his share of the land and then retaliated when he filed a police complaint.

"Rana chased me through Savar with weapons," he said. "The police wouldn't even dare to protect me. The police were always scared of them."

Another adjacent family said Rana sent representatives to try to persuade them to sell a plot, including a small pond, beside Rana's land. By 2005, a year before construction started on Rana Plaza, Rana simply falsified a land deed to take possession of the pond, the family said.

Bangladesh initially sought to attract foreign investment by creating Export Processing Zones, which had higher quality buildings and tighter regulations. But as demand from foreign buyers rose, factories began sprouting across the country, including quickly built structures to accommodate the small operators who did subcontract work on tight margins.

By 2011, Rana had rented out the existing five floors and gotten a permit from the mayor, a political ally, to build additional floors. Khan, the former mayor, said this practice created serious risks, since officials were handing out permits, often for bribes, without insisting on the necessary safeguards.

"For the garment industry, Savar grew quickly, and in an unplanned manner," he said. "There are so many buildings like Rana Plaza in Savar."

Rana found factory owners to rent his new upper floors and appeared to be gaining in influence. Then on April 23, a problem arose. Workers on the third floor were stitching clothing when they were startled by a noise that sounded like an explosion. Cracks had appeared in the building. Workers rushed outside in terror.

By late morning, Rana's representatives had brought in Abdur Razzaque Khan, an engineer. Taken to the third floor, Khan examined three support pillars and was horrified by the cracks he found.

"I became scared," Khan said. "It was not safe to stay inside this building."

He rushed downstairs and told one of Rana's administrators that the building needed to be closed immediately. But Rana was apparently not impressed; he was holding court with about a dozen local journalists.

"This is not a crack," he said, according to Shamim Hossain, a local newspaper reporter. "The plaster on the wall is broken, nothing more. It is not a problem."

The next morning, Rana Plaza collapsed. Rana managed to escape from his basement office but was eventually discovered hiding near the Indian border. He was flown by helicopter to Dhaka and thrust before the media, looking dazed and disheveled.

Neither Rana nor a representative was available for comment. He has previously said it was the factory owners who insisted on opening for business the day of the collapse, and several of the owners have been arrested, as was Rana's father.

Even now, many people in Savar remained unconvinced that Rana will be punished or that his style of business will be cleaned up.

Promoted
Listen to the latest songs, only on JioSaavn.com
"Rana is not the only one," said Sarkar, the man whose land was taken. "Now, we have so many Ranas."