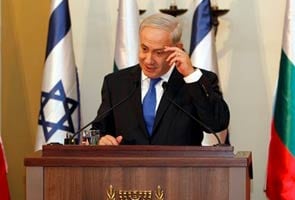 Jerusalem: Israeli Prime Minister Benjamin Netanyahu faces an even more awkward time with Washington and re-energised critics at home who accused him on Wednesday of backing the loser in the U.S. presidential election.

With Iran topping his conservative agenda, Netanyahu will have to contend with a strengthened second-term Democratic president after four years of frosty dealings with Barack Obama and a rift over how to curb Tehran's nuclear programme.

Facing his own re-election battle in January, polls give Netanyahu little chance of losing but perceptions that he has mishandled Israel's main ally have been seized on by opponents.

"I will continue to work with President Obama to ensure the interests that are vital for the security of Israel's citizens," Netanyahu said in a short, congratulatory statement hailing what he called strong strategic relations with Washington.

But in remarks underscoring a rift with the United States over possible Israeli military action against Iran, Netanyahu said in an interview broadcast on Israel's Channel 2 this week: "If there is no other way to stop Iran, Israel is ready to act."

Relations between Netanyahu and Obama hit a new low two months ago after the Israeli leader said nations which failed to set "red lines" for Iran - which denies seeking atomic arms - did not have the "moral right" to stop Israel from attacking.

Such comments, along with financial backing for Republican candidate Mitt Romney from a U.S. casino magnate who is also one of Netanyahu's biggest supporters, were seized upon by critics as evidence the Israeli leader was trying to undermine Obama.

Netanyahu denied he was interfering in U.S. politics.

But former Israeli ambassador to Washington, Sallai Meridor, suggested that Obama would not easily forget that Netanyahu had created a perception that Israel wanted Romney to defeat him.

Obama is "very strategic, very disciplined", Meridor said during a panel discussion on the U.S. election at the Institute for National Security Studies in Tel Aviv.

"But I don't think we can just assume that what happened between them over past four years will have just evaporated," he said. "When people fight for their political life and have the perception that their partner is trying to undermine their chances, it's not going to disappear."

One of the Israeli prime minister's own leading coalition allies, Eli Yishai of the religious Shas party, said simply: "It's not a very good morning for Netanyahu."

For the Palestinians, Obama's win over Romney - who offended them by suggesting during a visit to Israel in July that cultural differences accounted for the weakness of their economy compared with Israel's - stirred little emotion.

Palestinian President Mahmoud Abbas said in a statement he hopes Obama "continues his efforts to achieve peace in the Middle East". U.S.-backed peace talks with Israel collapsed in 2010 over Israeli settlement building.

At the forum in Tel Aviv, Dan Shapiro, the U.S. ambassador to Israel, said it would be unrealistic to think Obama would choose to ignore the Palestinian issue in his second term.

"It always finds its way back onto the agenda. You can't expect this to go away or remain on the back-burner," he said, without offering a prediction of what Obama might do.

In the West Bank city of Ramallah, unemployed Narmeen Taha, 37, voiced hope that freedom from re-election pressure might make Obama readier to take the Palestinians' side: "Maybe Obama, now that he doesn't have to worry about re-election, will exert more pressure on Israel than during his first term.

"But I also don't think we'll see a sudden turnaround."

Former premier Ehud Olmert, who accuses Netanyahu of harming Israel's "most vital interests", was more likely to announce his candidacy now that Obama was returned to office, analysts said.

Olmert unsuccessfully pursued peace with the Palestinians before resigning in 2008 over corruption allegations. Should he run, Olmert is widely expected to seek to unite centrist and left-wing parties into a new bloc trumpeting slogans warning of four more years of acrimony between Netanyahu and Obama.

"Netanyahu bet on the wrong president and got us into hot water with Obama," the opposition Kadima party said on Facebook.

In his message to Obama, however, Netanyahu adopted a phrase used lately by the president's own supporters to describe strategic relations with Washington as "stronger than ever".
© Thomson Reuters 2012
Comments
Barack Obama