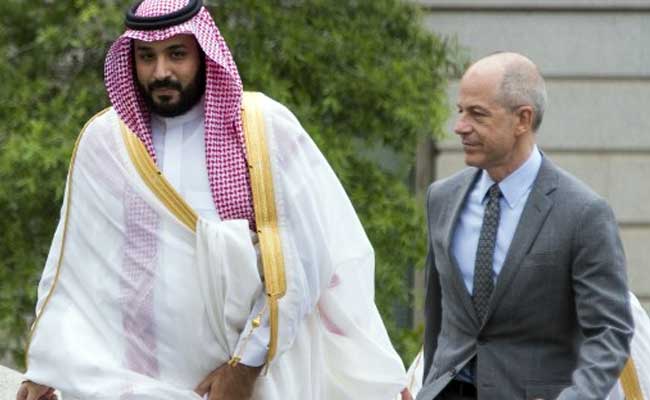 The 30-year-old deputy crown prince -- who has become the driving force behind economic reform and a more activist Saudi foreign policy -- swept into the West Wing with a band of aides for hour-long talks.

Mohammed bin Salman is the King's son and the country's defense minister, but he has met the very biggest of Washington's big hitters during a week-long visit.

He held talks with the CIA director, the secretaries of state, defense, treasury, commerce and energy as well as leading members of Congress.

Prince Mohammed's meeting with Obama took place in the Oval Office -- a rare honor for a non-head of state, one not afforded to the Dalai Lama earlier in the week.

"The meetings were very, very positive. I believe there was a commonality in terms of visions and views," said Saudi Foreign Minister Adel al-Jubeir.

Little is certain about the inner workings of the House of Saud, but the prince's high public profile has led many to speculate that he is the power behind his father's throne and could leapfrog designated successor Crown Prince Mohammed bin Nayef to become the next regent.

"He is notionally number three in the hierarchy, but effectively he's number one," said Simon Henderson of the Washington Institute, a think tank focused on the Middle East.

"The King prefers his son and wants his son to be king," said Henderson.

For the White House, Mohammed bin Salman is a relative unknown, while Mohammed bin Nayef has been the go-to royal on counterterrorism for years.

Gregory Gause of Texas A&M University said Prince Mohammed's visit was "an effort by him to be recognized."

The meeting came amid strained ties between the United States and Saudi Arabia over Iran, the war in Yemen and the seemingly imminent release of a US dossier about Saudi Arabian links to the September 11, 2001 attacks.

High on the agenda was Prince Mohammed's efforts to overhaul Saudi Arabia's state-dominated and oil-dependent economy, bringing in the private sector and creating jobs for the country's young population.

"Given their huge investment in education over the last decade, if they are not able to move away from a state-run economy and develop a private sector, you are not going to have the jobs that young people need," said former US ambassador to Saudi Arabia James Smith.

Amid disagreements over the US nuclear deal with Iran, economic reform appears to be a much-needed issue that could bring Riyadh and Washington together.

Obama's White House has repeatedly argued that Saudi Arabia's most pressing security task is internal reform to put the autocratic state on a more stable and sustainable footing.

During the Oval Office meeting "the president commended the deputy crown prince's commitment to reform Saudi Arabia's economy," according to the White House.

The meeting also addressed another of Prince Mohammed's signature policies -- Saudi Arabia's war in Yemen, which has been a point of deep contention between the White House and the royal court.

The United States has aided and publically backed the operation to push back against Iranian-backed Huthi rebels who took over the capital Sanaa.

The war signaled Saudi Arabia's willingness to tackle Iranian influence in the region.

But Obama's administration has been repeatedly embarrassed by the killing of civilians and worried that while the war has dragged on, Al Qaeda has been allowed to grow.

More than 6,400 Yemenis have been killed since the intervention started 15 months ago, the majority of them civilians.

There are signs that the war may be winding down and Saudi Arabia and its allies may be shifting focus to tackling Al Qaeda, even though the Huthis remain in control of most of the central and northern highlands as well as the Red Sea coast.

The United Arab Emirates on Wednesday announced its "war is over" in Yemen, although left open the possibility of a continued counterterrorism role.

"The president welcomed Saudi Arabia's commitment to concluding a political settlement of the conflict," the White House said.