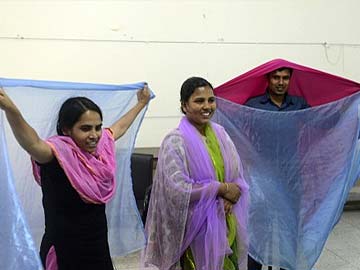 n a picture taken on April 13, 2014, Bangladesh survivors of the Rana Plaza garment factory collapse, perform a drama during a counselling session in Saver on the outskirts of Dhaka

Savar, Bangladesh: She was the "miracle" seamstress, plucked from the rubble of the world's worst garment factory disaster 17 days after her factory collapsed. One year on, she has married and found a new job.

Reshma Akhter, 19, was a rare bright spot in the Rana Plaza catastrophe on the outskirts of the Bangladeshi capital Dhaka on April 24 last year that left 1,138 dead and more than 2,000 injured.

Images of her, dusty and dazed, being plucked from the wreckage graced newspaper front-pages worldwide and turned her into a national heroine.

Like thousands of other survivors - as well as the rescuers who faced appalling scenes, often having to perform impromptu amputations on the spot - Akhter still suffers from insomnia and panic attacks.

But she married her boyfriend in a simple ceremony in her village in northern Bangladesh in February and is enjoying a new job in a hotel run by the international chain Westin, which approached her after her ordeal.

"I enjoy the job. This is completely the opposite of the work of a garment factory. The job is sober and relaxed," she said, adding that she would never set foot in a clothing factory again.

Speaking to AFP at her sister's home just metres from the site of the disaster, Akhter said she joined one of the five factories in Rana Plaza just 22 days before it caved in.

A year later, she says she has not received any compensation from a trust fund financed by Western retailers to compensate survivors, which has received only $15 million instead of a targeted $40 million.

"I only got some money from the prime minister and private donors," she says.

Promoted
Listen to the latest songs, only on JioSaavn.com
Since the experience she says she has become more religious, offering regular prayers for others in the garment sector and her late colleagues.

"I also pray our garment factories are safe so that none have to die there," she said.