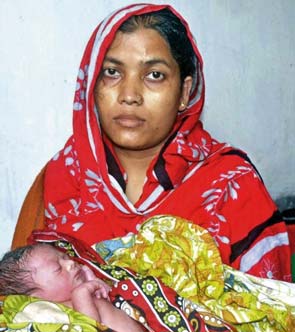 Dhaka: A baby boy who was born in a Bangladeshi storm shelter was named after an impending cyclone by villagers who hoped the gesture would protect them from the storm's wrath, an official said on Friday.

Village elders named the youngster Mahasen after he was born early on Thursday morning at a shelter in the Patuakhali coastal district, only hours before the eponymous cyclone slammed into the seafront.

"Jyuotsna Begum gave birth to the boy at Boalia Union Council cyclone shelter and villagers who were in the shelter named him Mahasen," said Mahmud Alam, the government administrator for the area.

"Our health workers later attended to her and both the boy and the mother are doing fine."

Alam told AFP that he had sent some new clothing and 2,000 taka ($25) on Friday to the boy's father Forkan Mridha after he learnt that the cyclone had partly damaged his tin and mud-built house.

Cyclone Mahasen hit the Patuakhali coast at 9:00am (0300GMT) on Thursday with a maximum wind speed of 100 kilometres (62 miles) per hour, but it lost much of its punch just after making landfall.

Promoted
Listen to the latest songs, only on JioSaavn.com
The government said at least 15 people were killed in the cyclone and tens of thousands of flimsy mud and tin-built houses were damaged or flattened.