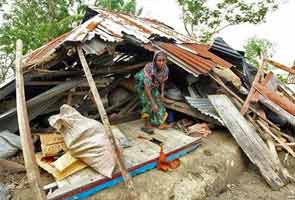 Sittwe, Myanmar: Myanmar's victims of sectarian strife were spared the full force of Cyclone Mahasen, but many are now returning to flimsy tents in flood-prone camps with the monsoon just weeks away.

Myanmar's Rakhine state is pockmarked with makeshift settlements for up to 140,000 people - mainly Rohingya Muslims - displaced by sectarian unrest last year that claimed about 200 lives and saw whole villages razed.

Many were evacuated last week ahead of Cyclone Mahasen, which later veered into neighbouring Bangladesh. But most have now returned, according to Kirsten Mildren of the UN's Office for the Coordination of Humanitarian Affairs (OCHA).

"They are actually no better off than where they were last week before the storm," she said, adding the cyclone was simply a "dress rehearsal" for the rainy season -- set to hit in a few weeks.

Many of the camps consist of little more than ramshackle bivouacs of bamboo and tarpaulin flung up in soggy paddy fields.

Sanitation is a key concern. Rain last week left standing water in many of the camps and Mildren said water-borne diseases such as cholera were a particular fear.

"Thousands are sheltering in areas that make them vulnerable and we need to find solutions to this, " she said. "If one week of rain has done this, imagine what it's going to be like in a couple of months."

Many Rohingya are completely reliant on humanitarian aid, with an almost total segregation of Buddhist and Muslim communities.

A lack of adequate food has also raised fears about malnutrition among children, many of whom have gone without access to education for almost a year.

"It makes me sad just to talk about our life here," 55-year-old Hla Hla Myint told AFP, describing conditions at the Mansi camp near the state capital Sittwe.

"Ants, leeches and earthworms come into our tents. We are living in the water. I am so sad. We have no food," she said.

While the former factory worker sought shelter from the cyclone with her two daughters in a local school, her husband and son stayed behind to guard their tent -- all they had to protect them from the monsoon.

Myanmar views its population of roughly 800,000 Rohingya as illegal Bangladeshi immigrants and denies them citizenship - they are considered by the United Nations to be one of the world's most persecuted minorities.

Attacks against Muslims - who make up an estimated four percent of the population - have spread to other parts of Myanmar, overshadowing widely praised political reforms as the country emerges from decades of military rule.

After months of warnings from rights groups and aid organisations, local authorities are now scrambling to build enough wooden shelters before the tents are swamped.

"I don't think we have much time left -- just over a month. These houses have to be finished in that time," Rakhine government spokesman Win Myaing told AFP.

He said about 70 percent of the required shelters had been built, although he could not provide exact figures.

The UN's refugee agency, UNHCR, which has previously warned of a "humanitarian catastrophe", said some 70,000 people most at risk from the monsoon would be housed in new wooden blocks.

That is in addition to shelters for 12,000 people already built by UNHCR along with an unknown number constructed by the government, according to spokeswoman Vivian Tan.

The semi-permanence of the wooden structures has caused concern that they will prolong segregation of communities - a solution, albeit temporary, that was advocated by a recent official report on the unrest.

Independent analyst Richard Horsey said a "huge challenge" would be to provide aid "without making these camps into permanent settlements".

Tan said the aim was to eventually return the displaced to their old communities.

"This cannot go on for a long time. Solutions will need to be found in their own villages," she told AFP.

At Bawdupha camp near Sittwe, more than 7,500 Rohingya have moved into 20 new barracks, each comprising eight one-family rooms. A dozen more are being built, but residents worry whether they would withstand a cyclone.

"The house is a temporary construction, not strong. I am concerned if there is a storm, it will be swept away," said Muhibulah, 55, who has been living in the camp with his wife and three children for almost a year.

Like many Rohingya he has little faith in the authorities.

Promoted
Listen to the latest songs, only on JioSaavn.com
"We don't trust the government. Absolutely not," he said.