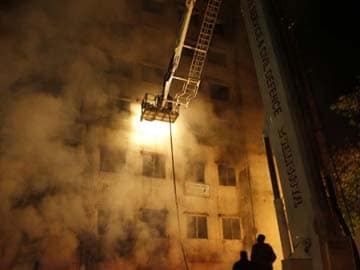 This photograph taken on November 24, 2012, shows Bangladeshi firefighters trying to extinguish a fire at the nine-storey Tazreen Fashion plant in Savar, some 30 kilometres north of Dhaka.

Dhaka: Bangladesh police on Sunday brought charges over the nation's deadliest-ever garment factory fire, accusing the owners and 11 others of negligence that led to the loss of 111 lives.

Police charged owners Delwar Hossain and his wife, along with security guards and managers, over the blaze 13 months ago that gutted the nine-storey Tazreen factory on the outskirts of Dhaka where workers stitched clothes for Western retailers.

"Delwar and his wife Mahmuda Akter ... and 11 others have been charged with death due to negligence," A.K.M. Mohsinuzzaman Khan, the police investigator in the case, told AFP.

The factory, in the Ashulia industrial district, supplied clothes to a variety of international brands including US giant Walmart, Dutch retailer C&A and ENYCE, a label owned by US rapper Sean "Diddy" Combs.

The fire on November 24 last year was the country's worst at a garment factory and shone an international spotlight on appalling safety conditions in an industry worth more than $20 billion a year.

Bangladesh pledged to clean up the industry after that disaster in April, and more than 100 top Western retailers have signed up to new safety agreements to allow greater scrutiny of their operations.

Victims of the factory fire, mostly women who were paid as little as $37 a month, found themselves overcome by smoke or were forced to jump from windows on upper floors.

Managers and security guards were charged over their insistence that workers return to their duties even though smoke was billowing from the ground floor where the fire started, said Khan, the police investigator.

"Fire alarms rang as soon as the blaze broke out. Panicked workers tried to leave the factory before the fire spread," Khan told AFP.

"But the managers and the security guards told the workers that it was nothing serious. The alarms were meant for fire drills," Khan said.

Khan said it was "possibly the first time" a garment plant owner has been charged over a fire at one of the nation's 4,500 factories, where deadly accidents are common.

Factory owners are rarely charged over such tragedies in the sector, which is a mainstay of the impoverished country's economy, accounting to up to 80 percent of Bangladesh's exports.

The 13 people are charged with committing culpable homicide not amounting to murder and causing death due to negligence, said police Inspector Mohammad Asaduzzaman.

All 13 could face life in prison if convicted.

But a union leader reacted angrily to the charges, saying they were too lenient, and predicted that the cases would drag on for years.

"The owners were directly responsible for the murder of more than 100 workers. Yet they are not charged with murder," Babul Akter, head of the Bangladesh Garment and Industrial Workers Federation, told AFP.

"The charges they've been accused of are bailable and will be hard to prove. The case will drag on for years in lower and higher courts and will eventually lead to lighter sentences or no conviction at all."

A magistrate and prosecutors will scrutinise the charge sheet, filed with the senior judicial magistrate's court in Dhaka, at a hearing on December 31 to decide whether to proceed with a trial and issue arrest warrants.

The owner, who since the tragedy has been barred from leaving the country, has been accused of breaching construction rules including building staircases that were too narrow and unsafe.

An engineer employed by the factory was also charged over faulty factory construction, Khan added.

The industry, where four million workers sew clothes for the world's top retailers for low wages, is the world's second largest after China.

The government last month raised minimum wages for workers by 76 percent and launched inspections of factories in the wake of mounting criticism that authorities were failing to improve the sector.

Promoted
Listen to the latest songs, only on JioSaavn.com
The new minimum wage of $68 a month still makes Bangladesh one of the lowest paid garment sectors in the world.