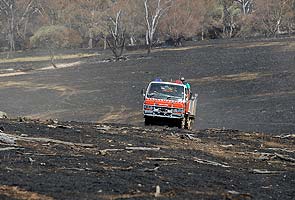 Sydney: Australia's weather went "on steroids" over a summer that saw an unprecedented heatwave, bushfires and floods, the climate chief said on Monday, warning that global warming would only make things worse.

The Bureau of Meteorology has confirmed the three summer months ending on February 28 were the hottest season ever recorded in Australia, leading the government's Climate Commission to label it the "Angry Summer" in a new report.

"The Australian summer over 2012 and 2013 has been defined by extreme weather events across much of the continent, including record-breaking heat, severe bushfires, extreme rainfall and damaging flooding," the report said.

"Extreme heatwaves and catastrophic bushfire conditions during the 'Angry Summer' were made worse by climate change."

The agency's chief commissioner Tim Flannery said the summer had been one of extremes, and was in some ways like an athlete who improves their baseline performance by taking steroids.

"The same thing is happening with our climate system," he told the Australian Broadcasting Corporation.

"As it warms up we're getting fewer cold days and cold events and many, many more record hot events. So it is -- in effect it's a climate on steroids is what we're seeing."

Australia experienced its hottest ever average national maximum temperature on January 7 of 40.30 degrees Celsius (104.5 Fahrenheit), while 44 sites, including Sydney and Hobart, recorded all-time high temperatures in the summer.

The report said there have only been 21 days in 102 years where the average maximum temperature for the whole of Australia has exceeded 39 Celsius and eight of these happened in the summer just gone.

The Climate Commission said it was "highly likely" that extreme hot weather would become even more frequent and severe in Australia, and around the globe, over the coming decades.

"There is little doubt that these events will continue to become worse, the hottest temperature will become hotter, of longer duration and more frequent," report author Will Steffen told reporters.

"This is virtually certain because of the extra heat that is in the atmosphere."

Steffen said the data proved that climate change "is not some hypothetical thing that will occur in the future, the climate has actually changed".

In addition to the heatwave, Australia also experienced dangerous bushfires in several states, including New South Wales, Victoria and Tasmania where more than 100 homes were lost in January.

Later that month, ex-tropical cyclone Oswald brought extreme rainfall over the east coast to Queensland and New South Wales, resulting in severe flooding in many areas.

Flannery said many communities, such as those in flood-prone parts of Queensland which were still recovering from an epic 2011 deluge, were experiencing a sense of exhaustion from dealing with weather events.

Promoted
Listen to the latest songs, only on JioSaavn.com
"And we're seeing the actual costs now of inaction, of global inaction to deal with this problem," he said.