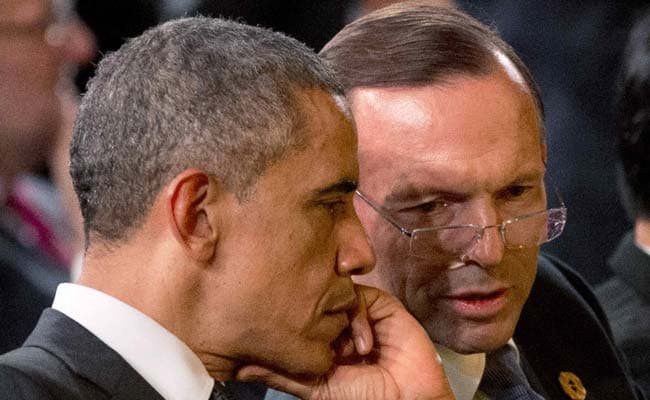 Canberra: Australian Prime Minister Tony Abbott today backed an "effective" climate pact being struck at global talks in France next year, but warned it could not come at the expense of the economy or jobs.

French President Francois Hollande, on a state visit to Australia, also laid out his aim of seeking the worldwide, binding agreement in Paris after world leaders failed to agree new curbs in Copenhagen in 2009.

"Yes, each country has to do its bit to tackle the emissions problem," Abbott, fresh from hosting world leaders at a G20 summit in Brisbane, told a press conference in Canberra.

"We all are doing what we can, Australia as well, and we need a strong and effective agreement from Paris next year."

The G20 economies catapulted "strong and effective action" on climate change up their agenda after last weekend's talks which followed a surprising Sino-US deal to curb emissions.

Abbott, who since coming to power a year ago has dismantled a carbon tax designed to reduce emissions and spoken of the importance of coal to provide energy, said climate change was an important subject "that the world needs to tackle as a whole."

But he added: "It's very important that we don't have another disaster like Copenhagen.

"It's vital that the Paris conference be a success, unlike Copenhagen, and for it to be a success, we can't pursue environmental improvement at the expense of economic progress.

"We can't reduce emissions in ways which cost jobs because it will fail if that's what we end up trying to do.

"What's important is that the agreement is strong and effective and that the targets are met."

He said he hoped "we can at least reach an agreement in principle at the end of 2015".

Promoted
Listen to the latest songs, only on JioSaavn.com
"It has to be legally binding ... and it has to have some sort of link with the Green (Climate) Fund," he said, referring to that set up to help poorer countries tackle the problem which has attracted billions of dollars from the US, France, Germany and Japan.

The G20 meeting of the world's most powerful economies - which includes the worst greenhouse gas polluters China and the US - said Sunday they would press for a deal in the French capital in 2015.