'My House Is Full Of Blood': Over 145 Dead In Powerful Mexico Earthquake

The U.S. Geological Survey said the epicenter of the Mexico earthquake was 76 miles southeast of the capital, near the town of Raboso in Puebla. 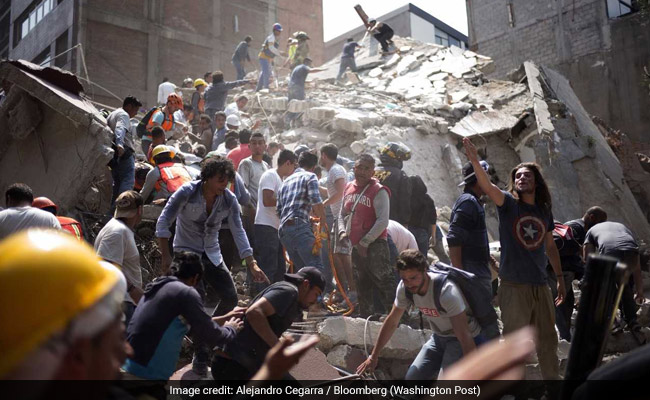 Earthquake in Mexico: Over 145 dead, many feared trapped in the debris

Mexico City: A 7.1-magnitude earthquake struck central Mexico on Tuesday, collapsing buildings and killing scores of people on the anniversary of a 1985 quake that devastated Mexico City.

Coming less than two weeks after a deadly temblor off the country's Pacific coast, and just hours after a siren signaled an annual earthquake drill in the capital, Tuesday's quake shook the ground with terrifying force, buckling walls and sending panicked residents fleeing into the streets. There were reports of fires and gas leaks.

At least 146 people were reported killed, local officials and news agencies reported. They included 55 people in Morelos state south of Mexico City, 32 in the state of Puebla, one in Guerrero state, nine in the state of Mexico - which surrounds the capital - and 49 in Mexico City.

Residents feared more people were buried under rubble. At least 44 buildings collapsed or partly collapsed in the quake, according to Mayor Miguel Angel Mancera. In the central Mexico City neighborhood of Del Valle, a frantic scene played out Tuesday afternoon as hundreds of people gathered to search for trapped residents. At least two multistory apartment buildings fell, and residents said dozens of people could have been inside.

Rescue workers carried at least one person out on a stretcher while helicopters circled.

Victor Arrecha, 25, who lived nearby, said he feared that up to 40 people might have been trapped inside one of the buildings.

"My friends lived there," he said, looking at the pancaked apartment building directly in front of his house.

Elsewhere, dozens of people were rescued from collapsed buildings.

The U.S. Geological Survey said the epicenter of the quake was 76 miles southeast of the capital, near the town of Raboso in Puebla. (The epicenter is the point on the earth's surface directly above where the earthquake occurs.) The quake struck at 1:14 p.m. local time, the agency said. There appeared to be widespread damage, including to a major highway connecting Mexico City to Cuernavaca, the capital of Morelos, about 35 miles to the south. Authorities closed the Mexico City airport to inspect it for damage.

At the Clinica Gabriel Mancera in Mexico City, more than a dozen hospital beds had been set up on the patio outside as a triage center on Tuesday afternoon. Leticia Gonzalez, a 45-year-old maid in a nearby apartment building, said she tried to race out of the building but that concrete crashed down as she fled. Her right leg was wrapped in a bandage as she grimaced in pain outside the hospital.

"We were all running like crazy," she said. "This was the worst earthquake I've ever seen."

Marisela Avila Gomez, 58, was in her apartment in the central Narvarte neighborhood in the capital when the shaking began, toppling her furniture and shattering the windows. A piece of glass sliced deep into her right leg.

"My whole house is full of blood," she said.

Her husband, Francisco Vicente Lozada Garcia, 55, a landscaper, tried to drive across town to get to his wife, but traffic was snarled and the "street felt like gelatin."

The couple eventually made it to the Clinica Gabriel Mancera, where Avila Gomez was treated.

The earthquake struck less than two weeks after the 8.1-magnitude quake off the Pacific coast of southern Mexico. Scientists said the same large-scale tectonic mechanism caused both events: The larger North American Plate is forcing the edge of the Cocos Plate to sink. This collision generated both quakes. But it was unlikely that the quake earlier this month caused Tuesday's disaster.

"In general, we don't think there's a triggering effect over that kind of a distance," said Don Blakeman, a geophysicist with the USGS. In California, he said, there have been earthquakes that set off quakes tens of miles away and within hours. This distance was farther and the timeline longer. The recent Mexico quakes also did not share a fault line, he said.

Mexico City is partially built on old lake sediment, which is much softer than rock. The seismic waves can be amplified traveling through the sediment, Blakeman said, making the damage worse than in areas on more solid ground. He said aftershocks were possible, too. The rupture was approximately 50 kilometers, or 31 miles deep, and as a rule, the shallower an earthquake is, the higher the chance for aftershocks. "Fifty kilometers is pretty shallow, so I would expect aftershocks," Blakeman said.

The USGS's model for estimating earthquake damage predicts 100 to 1,000 fatalities and economic losses of between $100 million and $1 billion for a temblor of this scale and proximity to population centers.

The quake shook Mexico City so hard that the murky, stagnant waters of the city's ancient Xochmilco canals were churned up, turning the waterways into rollicking wave pools. Videos posted to social media showed tourists in flat-bottomed tour boats struggling to stay in their seats and hold onto their beers.

Roberta Jacobson, the U.S. ambassador to Mexico, said that one U.S. Embassy worker suffered a broken elbow in the quake but that no other staffers were hurt.

Mexico City has a large U.S. expatriate community, but Jacobson said she had not received reports of American deaths or injuries. "We're not hearing of U.S. citizens affected yet," she said in a phone interview, calling Tuesday's quake the strongest she had experienced. "I was on the fifth floor of the embassy, and it felt like a long roller coaster ride," she said.

The embassy building, constructed in 1964, did not appear to sustain structural damage, Jacobson added. She said U.S. officials were in touch with Mexican civil defense authorities and had extended offers of assistance.

In a Twitter message Tuesday after receiving news of the quake, President Donald Trump wrote: "God bless the people of Mexico City. We are with you and will be there for you."

President Enrique Pena Nieto was traveling to Oaxaca to inspect the earthquake damage that occurred earlier this month when the latest temblor struck. He turned around and returned to the capital, where he convened a national emergency council.

In the capital's southern neighborhood of Coyoacan, the walls of colonial-era buildings cracked and sagged in the quake, with some collapsing into rubble. Residents hugged and cried in the streets. At the Barricas Don Tiburcio shop, shelves bearing food crashed down and wine bottles shattered on the floors.

Promoted
Listen to the latest songs, only on JioSaavn.com
"This is the worst one I have ever felt," shopkeeper Beatriz Aguilar Bustamante said. "I don't know if I will have a house when I go home."